END_OF_DOCUMENT_TOKEN_TO_BE_REPLACED

The early morning weather warning was to prove right as rain interrupted the Feature race of round 5 of the Carling Mufflers Speedcar Pro Series at Speedway City. 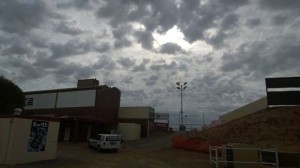 The Carling Muffler supported series would have had fans and race promoters disappointed with the entry list for this prestige event , 17 teams nominated for the round but only 16 faced the program start .

Todd Waddell set tongues waging early with his first up pace setting the quick time during qualifying .The Bennett Motorsports Toyota Eagle had set the mark but there more was to come During the heat races first South Australian Brock Hallet broke Steven Graham’s longstanding track record set back in 1998 then Todd Waddell lowered it further and the mark now stands at 14.117. 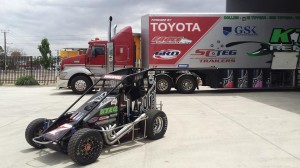 Rain during the show had forced the schedule to be changes with the pole shuffle being dropped. Heading the points as the teams moved to the line for the feature was Lee Redman from Mark brown and Brock Hallett . The feature started with rain in the offering and a damp track that started to get very hooky and would cause early cautions and together with mid race rain force the officials to declare the race with only 13 laps in the book .

Rain interrupted race are filled with both good and bad luck , depending just where you are at the time of the rain . Sydney’s Mark Brown was well on his way to breaking his terrible South Australian racing luck only to have his Spike /hawk started to misfire allowing his Bennett Motorsports teammate Waddell into the race lead .At this point mother nature took control forcing the declaration of the round 5 Carling Speedcar Pro Series .

At race end Todd Waddell had this to say
“”So many times in speedway, these drama filled races work against you, so on the rare occasion they go in your favour, you take it with both hands!” Waddell said as he celebrated, unfazed by the pouring rain as he exited the cockpit. 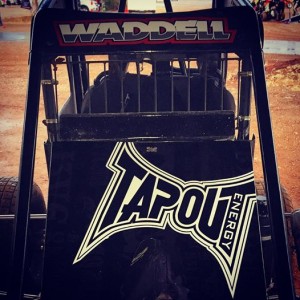 “We’re just stoked to get a win and getting quick time tonight proved we had the car to beat, so this is a great point’s haul for Bennett Motorsport.” 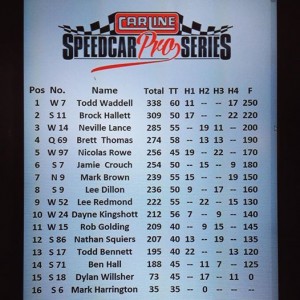 The teams now head to Tolmer Speedway which sits just off the Dukes Highway near the Victorian boarder . Defending Series Champion Kinshott take a lead of 108 points into the round 6 show from Waddell and 122 over former Australian Champion Neville Lance
The track at Tolmer has been reshaped and will offer a sensational racing surface for the Carling Speedcar pro Series round 6. 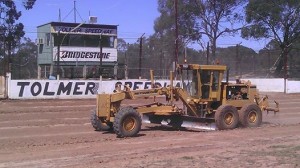 Getting ready for round 6 at Tolmer Speedway 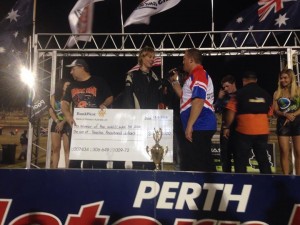 Starting out of position 6 Manders did not let the reputations of the visiting US drivers or the seasoned Australians to intimidate him. Running the McAllen prepare Deane Plant Hire car #21 the youngster calming moved past his more fancied and race harden rivals with skills that would have made Michael Figliomeni proud.

While Manders win might have come as a surprise to some the message was loud and clear a month earlier when Manders won his first Midget feature at Ellenbrook Speedway in round one of the Sheehan haulage Grand prix Series. 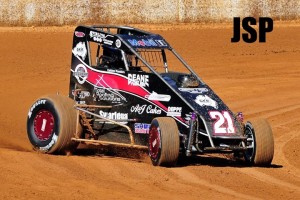 It was an emotional win for the young Manders; The Magic Man 34 pays tribute to former Australian Midget and Sprintcar Champion Michael Figliomeni
Sharing the podium with Kaiden Manders was Lee Redmond and Dayne Kingshott 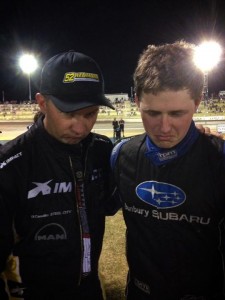 The opening round of the Carling Speedar Pro Series was run with the Magic Man 34 event .Round 2 of the Carling Pro Series in set down for Manjimup Speedway Sunday night .Manjimup is an aboringal name meaning the meeting place , will we meet you there ? 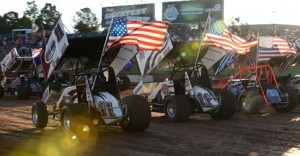 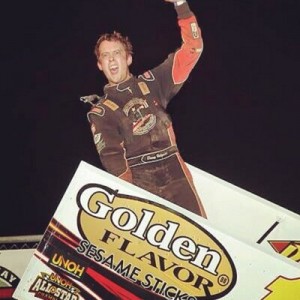 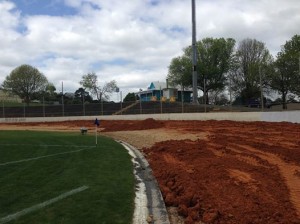 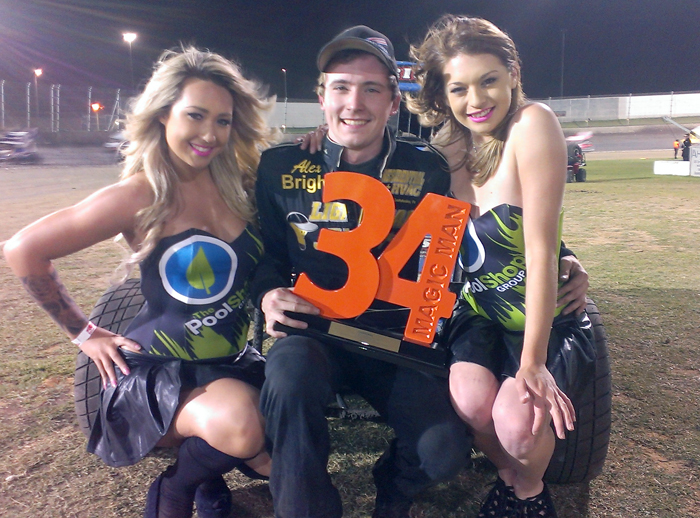 The race run over the Magic Number 34 laps was a fitting tribute to the late 4 Times Australian Champion Michael Figliomeni. 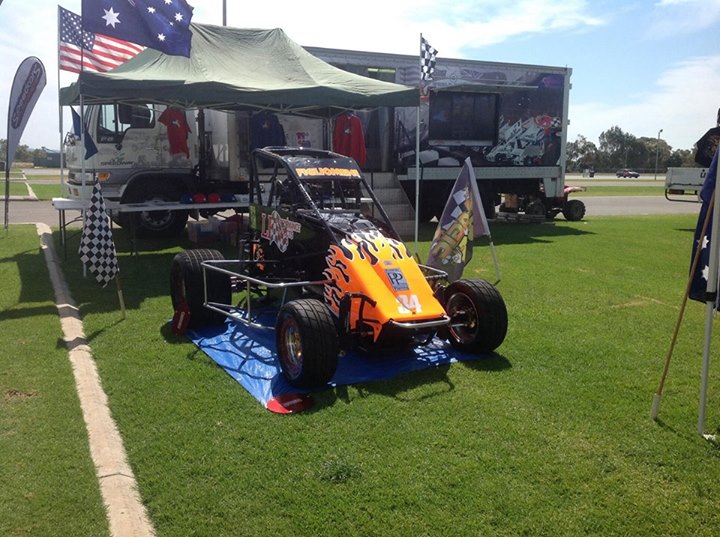 This is what the race is all about “The Magic Man “

Adam Clarke possibly Australia’s best started the night in sizzling form when he set the fast time and won the “Top7 “ Shoot out for pole . Adam Clarke had problems during the race and was out after 24 laps.

The defending Champion Ray started the race from position 6 and looked likely to score his 5th win in this special race.

Bright driving the Jack Berry owned Polar Ice entry raced Ray throughout the race exchanging slide jobs on the defending Champ as the pair worked vigorously for the race lead. 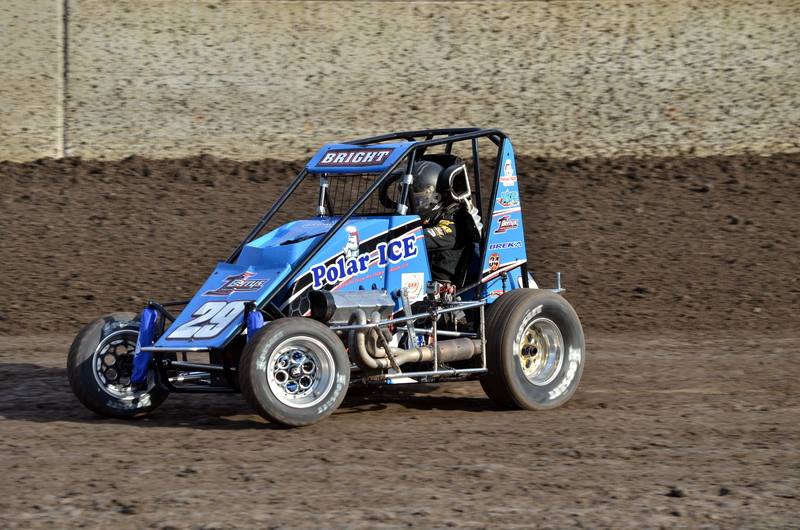 7 Laps out from the finish Davey Ray had to withdraw leaving Bright to hold off the late race challenge from Casey Shuman. The prestige of the Magic Man 34 Title after 34 of the most special laps in Australian Speedway was in the hands of the 23 year old from Collegeville Pennsylvania. Casey Shuman was second with Sydney driver Mark brown third.

While Alex Bright the ARDC Midget driver might have been a surprise winner in the eyes of many he had to respond many times to the Davey Ray challenges during the race, outside passes and nicely timed moves in the traffic were a delight to see.

I couldn’t be happier,” Bright said. 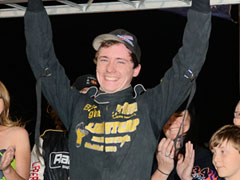 A happy Alex Bright after winning the Magic Man 34

He said it was a long journey but well worth it “to work with a great group of guys and an awesome car”.

Bright didn’t think he was going to win but said his confidence peaked after the pole dash.

Casey Shuman“I had planned on maybe seeing a lot more yellows and was trying to conserve on tyres a little bit,” Shuman said.

“I didn’t quite play in our hands.

“I love coming down here, the atmosphere is really cool.”

Shuman has only contested the race twice and paid tribute to the Figliomeni family and event organisers.

Mark Brown “Awesome people, it’s cool to come here and race in (Michael Figliomeni’s) his honour and hopefully I can come back next year.”

“It was tough work..it was just hammer down,” Brown said.

“I am just thankful to run in the memory of Michael…he was the best I have ever seen. We can’t bring him back but we have got the best family.” 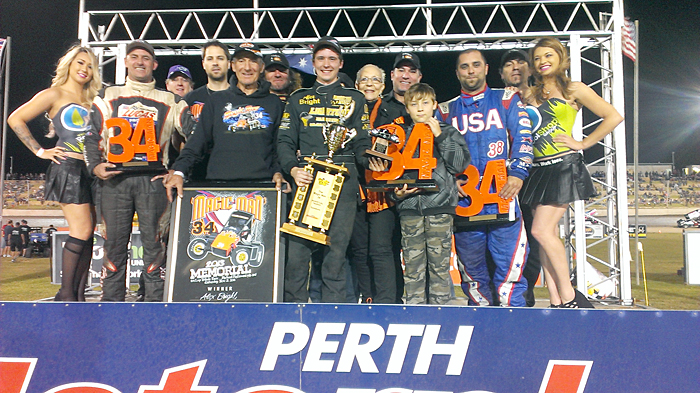 Speedcar Pro Series is pleased to announce GKR Transport as a corporate partner for its inaugural campaign.

“GKR transport are a household name in speedway and we are very proud to have this national company helping us with the Speedcar Pro Series in its inaugural year,” reported Speedway Australia’s Shane Collins.

“GKR Boss Kevin Small’s commitment to the sport is amazing, and we now join the long list of people who can’t thank him enough for helping us out.” 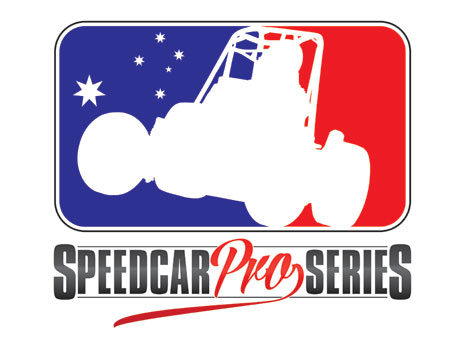