Kerry Madsen back in Victory lane at Knoxville

Kerry Madsen has been missing from the World of Outlaw roster for the last few races returns to winning form last night at NSL show at Knoxville .The Knoxville based team has been running a limited Outlaw campaign this year and after two disappointing runs at Jackson Motorplex and the Badlands Silver Shoot out the Knoxville victory will keep his legion of fans on a high .

With the American Custom Wheels livery replaced by the Keneric wrap  the team is making the most with reduced financial support , possibly the reason behind the limited Outlaw schedules .Cutting back on Outlaw appearance does not necessarily make racing easier .Knoxville attracts big fields and making A Mains can be more difficult  .Knoxville is full of Outlaw winners and of course the locals known their way around the fabulous venue better than most .Madsen the 2015 Track Champion is no stranger to Knoxville . 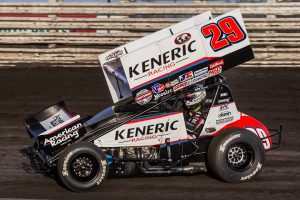 The 25 lap race was all Madsen and the Australian Champion was never ever under threat and won comfortably from Dusty Zomer and Craig Dollanski.

Kerry Madsen post race interview: “I ran it as hard as I could wide open,” said Kerry in Victory Lane. “I found the bottom down there, and I was comfortable with that. It was a really quick pace for a 25-lap race. The car was fantastic; I just can’t thank the guys enough. I pushed hard with the cars I had behind me. This is such a tremendous place. I can’t say enough about what it does for sprint car racing. It’s fantastic! I want to thank Brownell’s for stepping up tonight and its great what they do with the vets.” 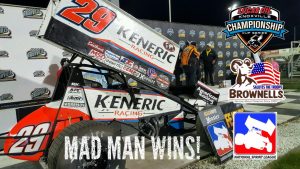