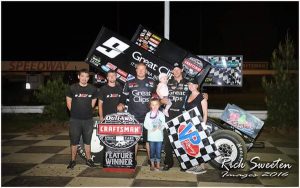 New Egypt- New Jersey You won’t see a pyramid or a camel but what you saw was a determined Daryn Pittman going about collecting his fourth win in succession at new Egypt .With the Posse looking to have the Outlaws eating their dust around New Egypt. Right from qualifying Hodnett looked like he would dominate the night, posting fast time during qualifying and leading every lap of his heat and the dash. The pill draw was a 0 so it ensures Hodnett’s good early pace would be rewarded with pole for the 30 lap a main.

Hodnett had the Lelands.com/Eagle Steel No. 27, working nicely out front and controlled the race right up until lap 16 when the three times Jersey Outlaw Classic winner found fast way round the top to first pass Mark Smith in the Mach 1 Chassis No. M1 before he grabbed the point from Hodnett. 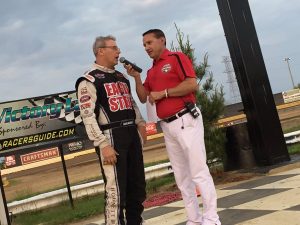 Once into the race lead Pittman built a gap between the chasing Posses but the lap traffic slowed the #15 and towards the race ends Hodnett found the top and started to close in on the Great Clips #15.The New Egypt event was the successive night that Hodnett had lost the race lead late and had to be content with the runner up spot.

Daryn Pittman “I’ve been really frustrated with myself with how many front-row starts I’ve had this year and as few wins,” Pittman said. “I got up this morning and thought ‘Man, third is where I want to start’ – I just had that feeling this morning that if I start third I was going to win.”Things went our way and we ended up starting third.” 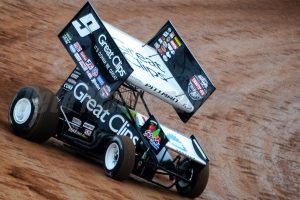 “We haven’t been struggling by any means, but we needed a win,” Pittman said. “This really makes me feel good, and makes them feel good going back home to Charlotte this week. We’ve had some pretty bad finishes but hopefully this can erase that and we can get on a better streak of just running up front.”I felt like I was struggling [later in the race]…Those last four laps, I didn’t feel like I made any of them very good, so I wasn’t breathing good until I saw them throw the checkered.”

Greg Hodnett ““I didn’t go up there until he passed and then I realized there was a whole other track to run on. We kind of caught him again in traffic and passed a couple lapped cars, but we just needed to keep running. He was definitely the faster car; we just needed him to slow down a little bit through some lapped traffic.” 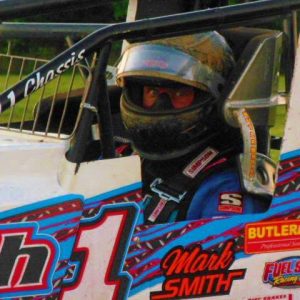 Mark Smith “”I was hoping to come down here and just get a top five, but we got a top three and we’re up here on the podium.” Smith said. “I kept trying different lanes to try and make some time up on Greg Hodnett], then I heard somebody, that ended up being Daryn.”He was a lot better than us and drove by us. We were about the same speed as Greg, but we just couldn’t go through lapped traffic like Daryn could” 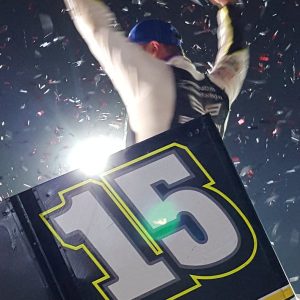 Weedsport ,May 22nd  The battle continued at Weedsport and the Posse was strengthen by the appearance of Greg Hodnett.All the talk continued around the Outlaw Posse Challenge but it was Logan Schuchart who took control of the 35 lap A main for 31 laps.

Schatz struggled  early and missed a start in the dash. Starting in P9 the seven times Champ had plenty of work ahead.Even though Schatz had had indifferent form this year he sits clearly in second place in the series and coming off a last start win at the Grove the Bad Boys /Chevrolet Performance #15 looked a threat from the green. Quickly moving through the pack Schatz had made the top 5 by the half way point of the race. Once into second the #15 ate up the gap quickly to close on Schuchart. 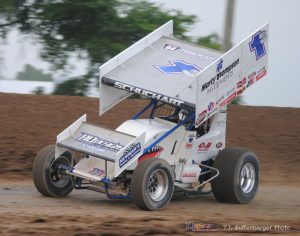 Schuchart had the hopes of the PA crowd on his shoulders as the Hanover hotshot went looking for his maiden Outlaw win.When Schatz has you in his sights it signals danger and despite withstanding all other challenges he could not withstand the final Schatz charge and the racer from Fargo North Dakota moved into the race lead with 4 laps to run.

The disappointment was evident when Schuchart spoke with the press .This was his second runner up spot with the Outlaws this year but the racer from Hanover is close to his maiden Outlaw win, it’s not far off judging by his form this year.Following Schatz and Schuchart home was the ever constant David Gravel in his CJB Big Game #5.Gravel has been steady all year and is quietly moving up the standing with 2 wins, 14 top 5 and 20 top 10 finishes.

The Outlaws will next go around on May 24 at New Egypt, New Jersey and Schatz will trail Brad Sweet by slender 39 points and the message to Sweet is clear the Bad Boy is coming and FAST.

Donny Schatz “I got all the faith in the world in this race team – Tony [Stewart] has assembled an awesome group of guys,” Schatz said, as raindrops started to fall from the sky. “These guys are unbelievable and we have a lot of fun together. I’m sure they’re ready to get off the east coast because I have been riding in the truck with them and I think they’re ready to get rid of me for a while and have a break. 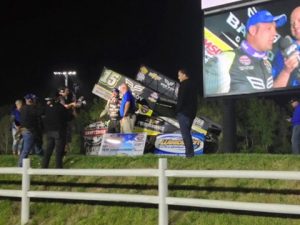 “We did go back to the notes from last year, but for some reason we can’t go back to that stuff, it doesn’t seem to work,” Schatz said. “If you look at tonight, I think the track record was broke by 23 cars, compared to last year we were rolling around a second slower, so that changes the dynamic of the car a little. You just have to stay on top of it and I have a great group of guys to do that.

“I don’t know if we have hit our stride yet, like I’ve said, we gain in one area and make ourselves better but we might lose a little in other spots. It’s a challenge, definitely fun at the moment trying to get a handle on it.”

Logan Schuchart “I just didn’t have the car at the end, we started to get too loose,” Schuchart said. “It’s a great run; the guys did a great job. We came up one spot short but it’s nothing to hang our heads about. We have a great team and we’re learning – but we’re a little disappointed.

“I couldn’t tell you [what happened at the end],” Schuchart said. “I got really lose, and before I even saw a numbered car beside of me, I knew it was the 15 car. He’s really hard to beat on these types of racetracks and I feel like these are the types of tracks I shine on – when it gets slick.

“These guys are tough, so to run second against these guys and just keep getting better is what’s important 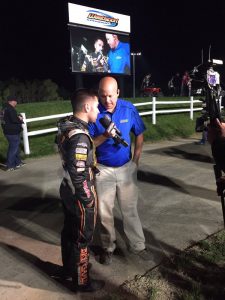 David Gravel “We’ve been running really well, then went to PA and struggled a couple of nights, so it’s good to back on the podium,” Gravel said. “It was a tricky track here tonight, and we were good at the end of the race. I got to thank all my guys – Austin, Derek, Barry – they worked their butts off on the long haul here.”

Schatz wins but the Posse was tough 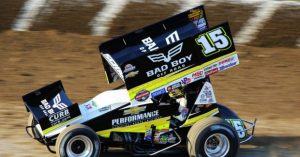 ABBOTTSTOWN, Pa. – May 19, 2016. After the wash out of night one of the Gettysburg Clash at Lincoln the battle for Sprintcar supremacy e World of Outlaws and the PA Posse continued.The regular clash between these two giants of US Sprintcars is eagerly anticipated by fans worldwide.

At Lincoin at least Donny Schatz did none thing and that was to clearly stamping himself as the top dog .Earning pole after his strong qualifying and Dash win the seven times Outlaw Champ lead from the start and every lap of the 35 lap journey to stake the Outlaws claim for supremacy .

The win might look easy from the official results but Schatz hard to stay on his marks as Danny Dietrich, Brent Marks and Greg Hodnett chased down the Champ right to the flag and in the process burnt off any other likely Outlaw challengers. Behind Hodnett came Logan Schuchart and Lucas Wolfe. Brad Sweet was the next best across the stripe. 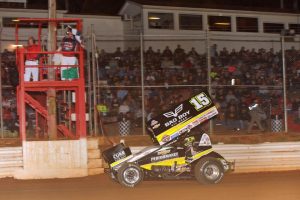 Schatz was clear and precise through the traffic but he needed to be as Dietrich always looked like he could threaten the lead. In taking his sixth win for the Outlaws season Schatz became the first Outlaw since 1997 to get over the top of the Posses in their backyard and claim the “Gettysburg Clash.

With Schatz giving the Outlaws some bragging rights partisan Posses fans would say 2spots on the podium probably squared up the argument so the question will now need to be resolved at the two night of the Morgan Cup at Williams Grove this Friday and Saturday night.Now with six wins in the bag Schatz has move up in second place and is making Brad Sweet’s lead of 91 points looking just a little vulnerable.

Donny Schatz: “It’s great to win here at Lincoln, especially after never winning here before,” Schatz said. “Everybody was pretty equal and you can see that because not too many cars got lapped during the race and that’s just the nature of the beast. That front-row starting spot was key, as it has been at a lot of races this year, and I am glad I could capitalize on it.

“The expectation is you want to win every night, and it’s not going to happen. We haven’t been that bad but for the standards this team has put forth the last several years, it kind of seems that way. We have tried several things, and I guess to be in the situation we are in right now where we can try these new things and make ourselves better, that’s going to pay off for us at the end of the year.”

Danny Dietrich:” This was a good run for the team,” Dietrich said. “To be able to run second out of 38 or 39 cars it’s definitely a good feeling. We’re satisfied with our finish tonight, just too bad it couldn’t be one position better. 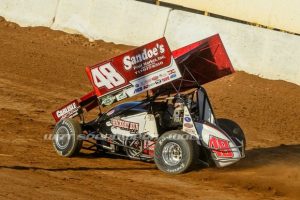 “Donny [Schatz] is a heck of a racer, catching him and passing him was going to be a whole other problem. He was in the preferred on the start so that made things a little tougher, but congrats to him and we’re going to move on to The Grove tomorrow.”

Brent Marks :” I got to second there, got past Danny [Dietrich] in turn three, and I thought he was going to slide me back, so I drove it in too hard and just got over the ledge a little bit and he got back by me. I felt like I blew the race there because I felt like we had a good enough car that if we got some laps we could run down Donny. Don’t know if I could have done anything – maybe shown him my nose and put some pressure on him, but never got the opportunity. Other than that, I felt like we had a good run against the Outlaws and I can’t complain.” 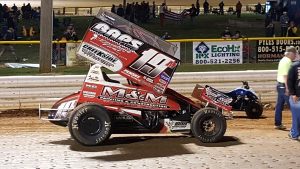 The Outlaws and the Posse now take their battle to Williams grove Speedway for two night of the Morgan Cup on Friday and Saturday night.