The two shows of round 8 in Lismore for the POWRI World Midget Championship finally got underway after storms with heavy rain threatened the final rounds of the Australian and New Zealand legs of the POWR Championship. There were lots of questions to be answered at Lismore, could Clauson continue his stunning recent form, would luck play into Pickens hands after recent runner up performances to Clauson. The final question was how the Australian drivers would fare in this their last encounter with the visiting International drivers. 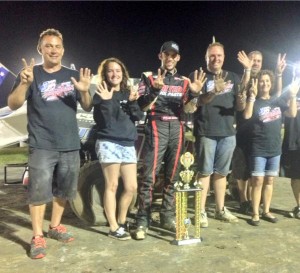 Bryan Clauson and the winning Team at Lismore POWRi

The recent performances of Clauson this tour has been simply stunning with only Rico Abreu Brad Mosen achieving the wins in the series other than for Clauson. Clauson has been great, Michael Pickens has been closed to winning over the past 4 shows and the last night in Lismore the luck and recent gremlins appeared to have been washed away with the recent rain. Pickens was fast all night and.

The Vernon and Vazey mounted Pickens along with team mate Darren Hagan and Brad Mosen looked the likely challengers to Clauson.
The 40 lap decider and the top six positions were decided by the Gold Shoot out and the results were : Bryan Clauson , Michael Pickens, Darren Hagan, Kaiden Manders , Hayden Williams, Matt Smith , Brad Mosen and Nathan Smee .
During the Gold Shoot out Bryan Clauson set a new one lap track record .Clauson stopped the clock at 12.789sec 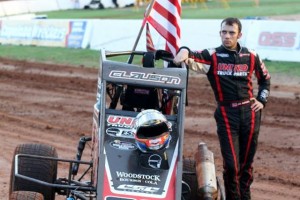 ..A field of 20 cars were despatched by the green as they race away for the first lap around the Lucas Oils Lismore Bull Ring. The start was perfect for Pickens leading Clauson. The two New Zealand based teams raced at the head of the field with Pickens punching out lap after lap with a comfortable gap to Indiana’s former USAC Midget Champion.

Just when you thought Pickens was headed for a blistering race win the right front tire popped of the bead sending the Kiwi into a wild tumble into the safety fence .Once again the gremlins had hit the Pickens plan. Pickens was uninjured and the race restarted.Eight laps to run and the race had been handed to the USAC racer and his United truck Parts Team from New Zealand. .While luck plays a big part in race wins the professionalism that Clauson brings to the Team on each of his visits is clear. 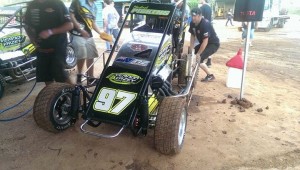 The final placings were Clauson, Hagan and Brad Mosen. Matt Smith was the first Australian to cross .First time tourist Oklahoma’s Tyler Thomas brought the Queensland owned USA #42 home in fifth place. The POWRi World Midget Championship will now move back across the Pacific to the USA for events later in the year.

At Lismore the performances of our youngsters Rusty Whittaker, Brayden Wilimgton and particularly Kaiden Manders from Western Australia were impressive.

The POWRi Management might  try to persuade Dwayne Kingsport to race in the series even though he appears to be a solid Speedcar Pro Series Contracted driver and dual Champion.. Brett Thomas ran both during this years so it is possible .

Talking Speedway is supported by Flat Out Magazine the magazine for all open wheel race fans .The current issuse now out and available on line .We will deliver to your door by Australia Post Au $7.95 – ORDER NOW ! 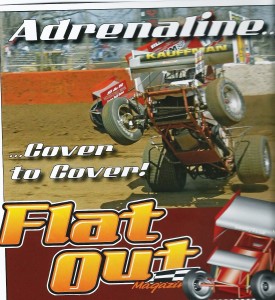