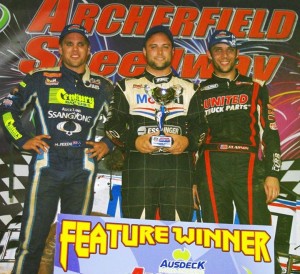 Pickens, Mosen,Clauson on the podium at POWRi Worlds

They came across the ditch and with the Americans dominated the first leg of the 4 World POWRi Championships rounds in Australia.

On a race track that had suffered under heavy rainfall for most of the week Brad Mosen managed the hooky track perfectly to win in a flag to flag performance over Bryan Clauson.
Mosen and Clauson owned the front row of the 25 lap Preliminary Feature but as they rolled to the start the Kiwi got the better drive and stormed into the first corner lead. As the race started to settle it was clear the KIWI had the track condition mastered and increased his race lead over the United Truck Parts entry of Clauson.

Clauson was unable to close the gap between himself and Mosen; never getting close enough to be a serious threat .Clauson had posted the quick time during qualifying earlier in the night but his car speed somehow deserted the 2014 Chil Bowl Winner during the feature. The second place was enough for Clauson to consolidate his position at the top of the points as the team’s head into night two.

The visitors completely dominated the race with the first 6 positions going to the Kiwis and the Americans;

The top 7 positions were
Mosen, Clauson, Pickens, Hagen, Gwilliam and Hunnibell .Matt Smith was the first Australian to cross the stripe..The top six cars were all New Zealand owned and the Veron and Vazey Race Team would have been over the moon with the results gained by Pickens and Hagen. Michael Pickens was a perfect choice to replace the NASCAR bound Rico Abreu
The strength and power of the Kiwis was again demonstrated as they continued their recent domination of the Aussie guns. 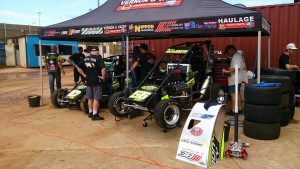 Pickens and Hagen in the Pits

The Aussie teams have a lot of work to do to get over the visitors and night two at Archerfield gives them the perfect opportunity to reverse recent results. 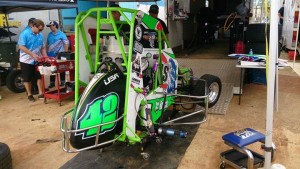 Track conditions should be different for tonight’s Feature. Early weather forecast suggests that a slight chance of rain around 3pm but clearing as the afternoon and early evening approaches. But as we all know Queensland weather this time of year can turn nasty very quickly.
Points after night one: 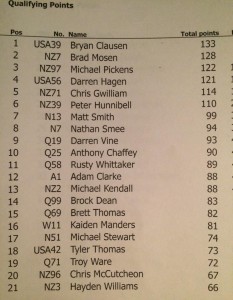 Clauson and Mosen heads the points