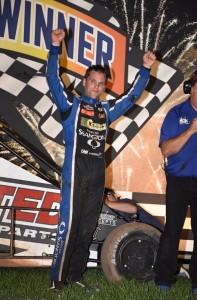 The New Zealand Midget Championship dates back to 1940 when the first Championship was decided at Western Springs. Frank “Satin” Brewer claimed by both Kiwis and Aussies won the first Championship ahead of Ron Roycroft and M Hughes.
The honors board for this Championship is filled with legends of New Zealand Speedway. Names like Roly Crowther, Ross Coonan and Barry Butterworth just three of the many that have carried the NZ1 on their midget.
This Saturday night at Western Springs Speedway Michael Pickens faces a dilemma, should he as permitted carry the Australia 1 into the Championship. A variety of views from both sides of the ditch.With six years of carrying the NZ 1 plate it might appear a little strange but from and Australian fans point of view but I would be quite proud if Michael Pickens had it blazoned across the tail of his Brekka.

The eligibility rules in Speedcars in Australia and New Zealand allow for internationals to run in the National Championship so it there is no argument, rules might be wrong in the eyes of some.This Championship will have plenty of contenders for the coveted NZ1 none more determined than current Champion Brad Mosen who will need to withstand the charge from Michael Pickens .Timing is perfect for Pickens who is driving out of his skin with wins in the Internationals in New Zealand and Australia. 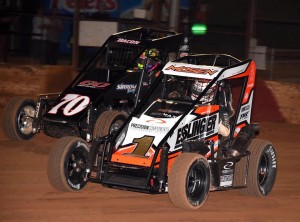 on the inside
Bacon with Mosen Kiwi NZ1
Credit Anthony Loxley

Confidence in the Pickens camp must be at an all time high particularly after his colossal drive during the Australian Championship. The ferocious of those last laps and Pickens ability in getting that last pass on Felker was racing that you would pay anything and goes anywhere to witness.Last week was just that, last week and Mosen, Williams will be much stronger at Western Springs in front of the home crowd.
Williams currently leads Mosen in the point at Western Springs Track Championship , the gap just 6 points with Mascovick,Alach and McCutcheon not too far adrift .These points mean nothing on Championship night.The winner of the Main Championship Feature will be crowed New Zealand Midget Champion for 2015/16 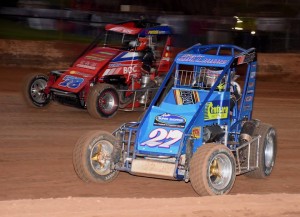 To Talking Speedway would like Anthony Loxley and Full Throttle Publishing for the use of photos for this story.Please visit http://www.fullthrottlepublishing.com.au/ where you will find Speedway history told in beautiful pictures in his many publications .Tony’s latest book due out shortly is titled “Caged Heat ” 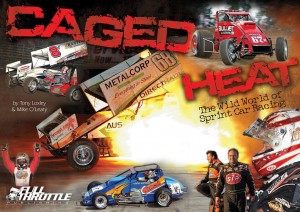