Smee smacks down the field in World Midget Opener 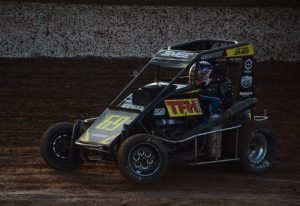 Both Abreu and Bacon started their nights off ending upside down in their heats while both would find trouble later during the feature. Michael Pickens was fastest during the time trials ahead of Sydney’s Troy Jenkins but had motor problem during the Feature .

Smee and Daum shared the front row and it was the Australian who set the early pace .Daum managed to sneak into the race lead momentarily but Smee soon regain the lead and was never headed,

Sydney’s Troy Jenkins was spectacularly fast all night and closed fast on Daum with two laps to runthen  took advantage of a Daum error to grab second. Jenkins deserved his second place after a stirring drive.

Although Smee took the Preliminary Feature it was Zach Daum who left the Speedway on top of points after consistent performances in his heat race.