Smee pounces and takes the final round of the 2013/14 Lucas Oils POWRI Speedcar Super Series at Valvoline Raceway. But it was Queensland Brett Thomas who takes the Championship home to Queensland.

After a nervous week when rain threatened and Kiwi ace Brad Mosen joined one of the strongest field to assemble for a POWRI SSS meeting the final night for the POWRi Championship has beaten off Speedways arch villain THE RAIN.,YES!

Starting out of position 5 Thomas was able to take full advantage of late stoppage with two laps to run and gets under Jamie McKinlay and secure the final podium position behind Smee and Matt Smith.

Nathan Smee and Matt Smith raced from the front row with Smee controlling a comfortable lead over Smith to the finish. Smee was fastest during the qualifying in his American Tire and Racing Services Mark Cooper owned car and although Smith tried to keep in touch he never looked likely to threaten.

The POWRi Lucas Oils Night was marred by a nasty tangle between three cars that sent Queensland Scott Jeynes into a wild flip. Once back in the pits Jeynes collapsed in car owners Terry King trailer and need medical support, after the paramedics managed to stabilize Scott they transported the Queenslander to Westmead Hospital for observation.

Brad Mosen’s quick trip across the ditch to sub for Queenslander Scott Wilson was disappointing as he suffered engine problem early and made only a lap or two after starting at the rear in the A main before retiring to the infield .

The final race results and the POWERi Championship tables: 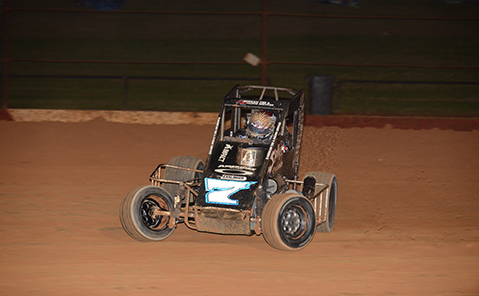 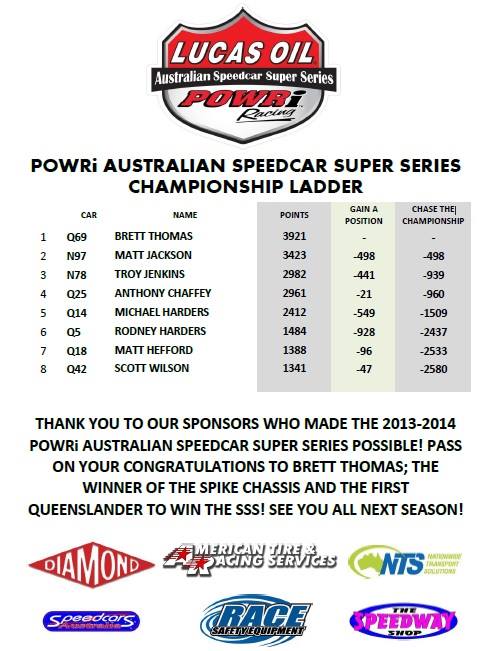