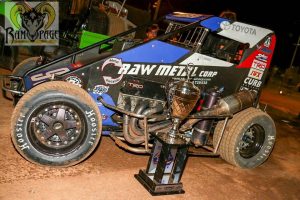 Rarely headed in races on this tour Abreu went into the final night with high points after the heats on Friday night. Beaten to the checker only once on the final night and that was in the heats by Queensland’s Anthony Chaffey. The seasoned 25 year old USAC professional started the Championship Feature from that magic position P1 with Kiwi Hayden Williams out of P2 and defending Champion Michael Pickens in P3.

It was no surprise that Abreu raced into the early  lead with Williams running a steady pace to keep the Californian in check. By lap 12 Abreu was still maintaining a Championship winning lead but the defending Champion Pickens still had the bit between his teeth and closed then passed Williams for second on lap 12 .Pickens dream of a second A1 Plate was gone four laps later when he experienced engines problems and returned to the infield. 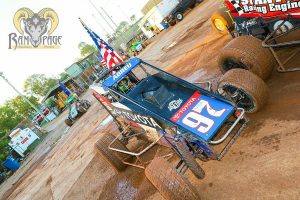 Abreu appeared untroubled in the lead but it was Brady Bacon who was starting to bring the crowd alive as he forced his way through the field and by lap 20 was in second and looking the only danger to Abreu.Bacon started to close the gap to Abreu but the two times Chili Bowl Champion had this race well under control , as brilliant as Bacon was Abreu and his Spike /Toyota had the challenge covered.

Passing the checker it was Rico Abreu the new Australian Speedcar Champion from the fast finishing Brady Bacon and Nathan Smee the first of the Australians across the stripe. Of the four New Zealanders in the field only Chris Gwilliams finished the race, Pickens, Williams and Mosen all were DNF..Alex Bright,finished in 4th ZachDaum in 8th and Andrew Felker in 9th..

Abreu and Keith Kunz set such a high standard during this tour and the Australian Championship is just reward .The Bullet by Spike /Toyota they prepared for this tour down under was “Gem”. Speedway fans should also applaud Todd Wanless and his Raw Metals Corp for their support of Keith Kunz and his Team. 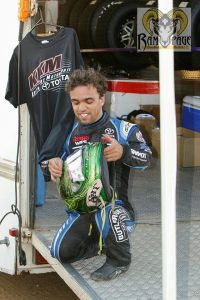 Well done Rico, as Australian Champion you will be wonderful ambassador for Australian Speedcars and Speedway.