The only summer storm that threatened the Lismore Speedway and round three of the POWEi Speedcar Super Series was the Hunter valley Hurricane aka Adam Clarke.
A reduced field of 20 competitors arrived at the Lucas Ols Lismore Speedway as a result of the frightening storm experienced last week in Brisbane. 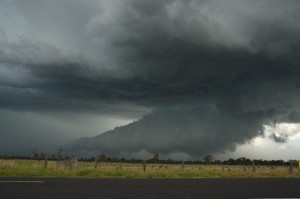 Clarke and the Jack Berry Racing  Polar Ice Team fired the warning shots early in the night by setting the quick time for the night over Nathan Smee and Michael Stewart.
Smee and Clarke headed the points tally going into the Feature, Smee 103 Pts to Clarke 101

.
The defending POWRi SSS Queenslander Brett Thomas started his night in the worst possible way with a flip during the hot lap session. The Illuminated Team repaired the race car but Thomas could not get back the lost momentum and did not figure in the final placings.Lismore has not been kind to Thomas during last January’s POWRi World Midget show Thomas suffer a terrible crash just past the pit entrance . 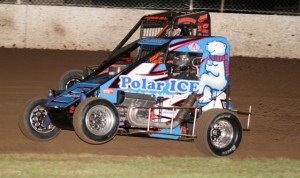 The two best Speedcar drivers is the country Smee and Clarke shared the front row as they rolled to the start. Smee on the pole, Clarke on the outside.
Right from the start this was looking like a 30 lap match race and the first part of the race certainly did not disappoint. Clarke was strong right across the groves and was holding back Smee’s attack. As the race developed Smee would start to fall off the pace depriving the crowd of a terrific finish, a slowly deflating right rear tire was the culprit. Smee held on long enough to finish 5th and still grab dome valuable POWRi point s.
With Smee his main challenger out of contention Clarke took the JBR Polar Ice #1 across the line a comfortable winner from Michael Stewart and young Queenslander Rusty Whittaker. 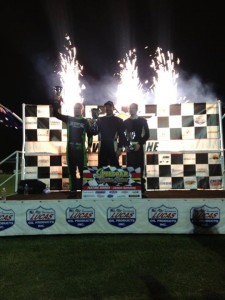 The POWRI SSS point after round 3:

Round 4 of the series heads down to the beautiful Shoalhaven area of the South Coast of NSW .The home of Nowra Speedway. Saturday night December 13th POWRi SSS Night 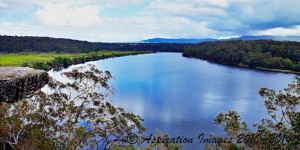