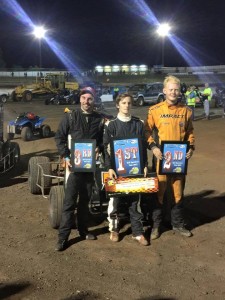 Last Saturday night Toowoomba Speedbowl was the venue for the 71st running of the Queensland Midget Speedcar Championship. What better time and place to record your first Feature race wins and the bonus was the Queensland Championship and the right to wear the Qld 1 on the tank of the Whittaker Speedcar’s tank
Even more special for young Whittaker as well joining the ranks of many of the past legends and Champions of Australian Speedway .Rusty now joins his dad Sid a winner in 2012 as only the second father and son to have claimed the coveted Title. The only other father and son to win the Championship were Ron and Todd Wanless
Standing in young Whittaker’s way was 2015 Australian Champion Adam Clarke, 5 times New Zealand and defending Champion expat Kiwi Michael Kendall and current POWRi Speedcar Super Series Champ Brett Thomas. Michael Kendall started his night in a positive frame of mind and posted quick time in qualifying over Clarke. The night started badly for the four times Australian Champion with minus points due to missing the drivers meeting. Despite his heat wins Clarke would start the Championship Feature from deep in the pack. Clarke most recent win was on the high banks of the Warnambool Speedway so the Aussie Champ would have fancied his chances.
After the heats it was young Whittaker who had the front row with  Brett Thomas and fellow youngster Matt Greenwood in row two.
30 laps and at the end the Queensland Title .Thomas was first to make the statement and raced into lead with both Whittaker and Greenwood chasing the POWRi Champion. The pair of young bucks attacked Thomas with Whittaker riding the outside and Greenwood punching in on the bottom .The Toowoomba crowd was witnessed to some super fast and close racing as the three looked for the point. The pair harassed Thomas with Whittaker finally grabbing the lead off Thomas and immediately started to build a lead over the chasing pack.
Not long after Greenwood made his move and passed Thomas, he had given Whittaker a handy lead and now started the chase.
Whittaker clear in the lead and Greenwood trying to bridge the gap without much success. Meanwhile Adam Clarke had started his march forward.
New Zealander Kendall was now in third position and Brendan Palmer fourth.
15 laps down and the Title in sight Whittaker continued to lead and by now had extended it to a third of lap over Greenwood and Kendall. By this stage Clarke had moved to sixth and by lap 20 had finally pass Thomas after a duel that had crowd captivated 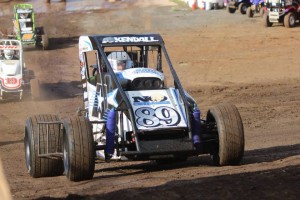 The Title chase stopped on lap 24 for the first yellow when Scott Doyle slowed forcing a restart. 24 down 6 to race and the Title was so close but still far away. Whittaker restarted with the same purpose and went straight back to work rebuilding his lead over Greenwood and Kendall who by now had to deal the fast arriving Clarke.
Three laps later and Chaffey losses a tire and another caution and you can feel the frustration in the the Whittaker pit.
Another restart and once again Whittaker appeared composed as he bounced back to the point with both Greenwood and Clarke looking for a late challenge. Yet another yellow for Thomas in turn 4 that saw the run to the finish under a green white chequered.
Whittaker ran a mistake free race and while some may have been surprised I have been following Rusty performances over the couple of years and recent runs suggested to me a win was not too far away. 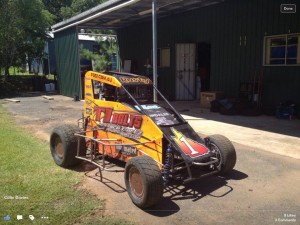 The Whittaker car with number one .

I first saw Rusty Whittaker in Lismore at the POWRi World Midget Championship and at that meeting had the great pleasure of speaking to a very proud grand father.
The podium presentation a special time for the Whittaker family. Rusty Whittaker 2015 Queensland Champion