Australia Day Weekend – Victory for the Stars and Stripes. 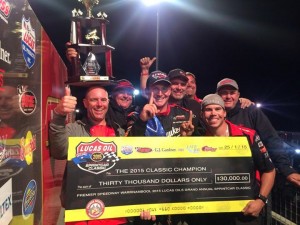 One of the most special days in Australia, the Australia Day Weekend has been host to two major speedway shows

.
In Brisbane the first two of the four POWRi World Midget Championships rounds and down south at Warnambool the Premier Speedway brought us the 43rd running of the Grand Annual Classic for Sprintcars before a packed house over three massive nights .Australian’s well known for meat pies, Kangaroos and Holden Cars arrived at Brisbane’s Archerfield and Warnambool’s Premier Speedway hoping for a Aussie win .Both these events brought the best available racecar drivers to our shores from the USA and New Zealand.
Tough for the race fans, even tougher for the local teams to see the visitors take spoils including the cash in both events.

POWRi World Midget Championship
The Kiwis and the Americans dominated both POWRi Shows in Brisbane with Brad Mosen the Kiwi taking the preliminary Feature and Bryan Clauson the major Feature. Night two of the POWRi Worlds was looking like being Darren Hagan’s night until he suffered tyre problems allowing the pole sitter Clauson to assume the lead and head to the checker and the race win. Clauson leaves Brisbane and with the rest of the teams and head south to Lismore for the final two Australian rounds. Clauson heads into the Lismore round as point leader over Kiwi Michael Pickens 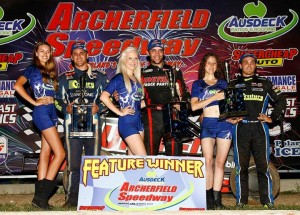 .As with previous night the Australian driver did not feature in the major placing the best again was Matt Smith with his fourth place finish behind Clauson, Pickens and Hayden Williams .We have a saying down under,”pull the finger out “it applies to the Aussie drivers as they struggle to get on terms with the visitors.

The 43rd Annual Sprintcar Classic –Premier Speedway Warnambool.
Three nights of racing, two qualifying rounds then the 40 Lap Classic .World of Outlaw winners, USAC Champions and winners from most Sprintcar sanactionsed groups across the USA and all the top Australian. This race the Annual Classic draws the very best to Warnambool and there can be no doubt that it is not only the most sought after wins on the Australian Sprintcar schedule but the best supported Speedway event in the country and promoted by possibly Speedway club the in the country

Sunday night the top point scores came together to fight out the 40 lap Classic main event and for $30,000 cash purse. It was a long night as the weather and cool air moved in over Warnambool and rain threatened the Classic .After a break racing continued on a sticky and tacky race track.
The interruption to the program was lost of the crowd as the field approached the starter, green and Hirst out of pole position assumed the lead. The Californian would never be headed during his fag to flag Classic win and in the process he took the 40 lap race apart by a whopping 1 minute and 13 seconds. 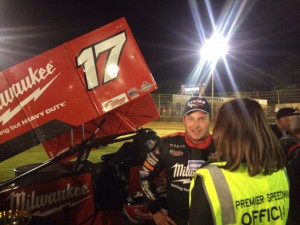 Brooke Tatnell started from position 5 and would pass both Madsen brothers as he raced into the second spot leaving the final podium position for the Victorian Anderson who started alongside Hirst.
We are all proud Australians down under but are quick to congratulate and recognize the great performances from our overseas visitors.
There is always another race.

Looking for the most comprehensive open wheel racing reports then head to our Flat Out Page the February edition is out now for online purchase at only $7.95 Aust. Including postage direct to your door in Australian and New Zealand .Secure payment by Palpay
The edition features interviews with all the US Champions for 2014, Schatz, Abreu, Daum plus amazing photographs.
Look for Brady Bacon and the salute to the 2014 Champs on the cover ORDER NOW!