Australian Sprintcar Championship on this Week End, who’s your pick

It’s on for real this week end at Brisbane’s Archerfield Speedway where the 57th Australian Sprintcar Champion will be crowned and will accept the applause from a Sprintcar mad crowd. 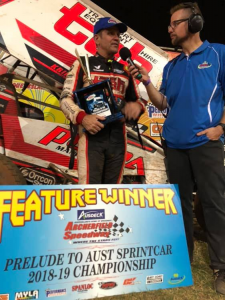 When the action starts tonight there will be 60 cars nominated 7 former Champions and a host of exciting young chargers who will hoping for luck against such a top-flight field.

It would be wise man that predicts the winner to this Title run over two nights that includes Time Trials.3 rounds of heats, Preliminary Features D, C, and B mains before the 40 Lap Championship Final.

Can Kerry Madsen make it four on the trot, will McFadden add to his collection of Titles maybe Veal will grab his first Title. Not forgetting the old Journeyman Robbie Farr who has hit top form at the right time. There are so many chances in these big events and after 2 nights and lots of hard racing the Team that get it preparations right will give its driver the best chance. Easy to write, hard to put in place.