Saturday night November 22nd Perth Motorplex race fan will get their first chance to see the 2014 King of the West Sprintcar Champion Kyle Hirst. The dual KWS Champion who hails from California will be running the Monte Motorsports Milwaukee Tools #WA17. 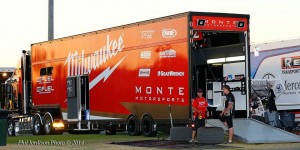 Hirst will be joined by US based Aussie favorite the lad from San Soui in NSW Brooke Tatnell .

The powerful Kirkke Motorsports Team will provide the equipment again in 2014 so Tatnell can monster among other races the World Series Sprintcars.
Saturday night’s race in Perth will be the 33rd running of the Scardifields Smash Repairs “King of Wings “ , 40 laps of torrid racing can be expected .

Another to watch is Ryan Farrell, sensational local racer and seven times Western Australian Sprintcar Champion who has recently returned to the sport after a short time away. Never far from the front of any Sprintcar race Farrell can be expected to give nothing away to the visiting US based racers.

Along with Farrell the dark horse in the field might well be Shaun Bradford, seasoned racer who has figured strongly in WA Sprintcar shows this season. 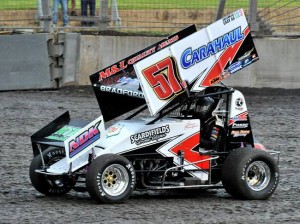