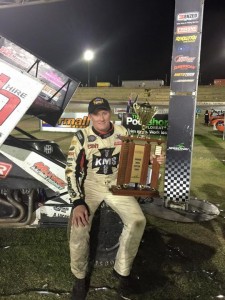 Perth West Australia: Saturday night in Perth at the Motorplex it promised so much for Australian Sprintcar Champion David Murcott but delivery little. Murcott’s misery was Tatnell’s triumph .The Knoxville based Australian finished third and secures enough points to take his 9th World Series Championship.
Murcott arrived in the pits at the Motorplex with his Horrell Motorsports team holding a 70 points advantage over the Kirke Motorsports Team of Tatnell’s.
Californian Kyle Hirst fire off the first warning shots over Murcott’s wings when he posted quick time during qualifying .Murcott timed in 3rd quick and gains points on Tatnell who struggled with engine problems during the timed runs. The Kirke team was quick to change motors to keep Tatnell in the race. 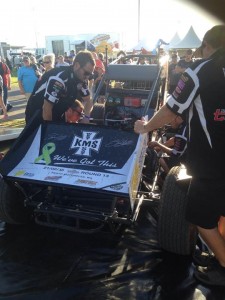 After poor qualifying team changes the engine in the KMS car

All the qualifying heats completed and the points tally confirmed that David Murcott had secure enough points for a front row starting slot for the Grand Final feature. The recently returned Aussie Outlaw Kerry Madsen had taken the pole for the Feature .Kerry Madsen fresh from his successful All Stars and Outlaw shows at the Dirt Car National in Florida flew back into Perth just for the WSS Grand Final.
Right from the green drop Madsen showed all the Outlaw punch to take a commanding race lead over Murcott as the field attacked the 30 lap decider. Madsen out in front, Murcott and Tatnell engaged in a battle behind for the Championship. The Championship was far from being over with both McFadden and Hirst starting to impose their will over the field as they charged after the leaders.
The race was almost over, only a handful of laps to race when Jason Kendrick would suddenly turn hard right in the front straight and Murcott with nowhere to go other than into Kendrick. At first the damaged appeared to be only on the front wings and the Murcott was able to restart and continue his Title chase.
The damage first thought to be minor was anything but. With Murcott at speed the racecar failed to turn, steering failure and the A1 headed straight into the fence .Murcott’s night and dream of a World Series Championship gone
Murcotts car was removed to the pit enclosure and the Australian Champion followed, helmet under his arm, the body language told the story of devastation and disbelief that his Championship had gone.
The Perth track was perfect providing drive right across the track .The Madsen car was on rails and in command .McFadden and Ryan Farrell had come out of P11 and P15 and were bulldozing their way towards the leading cars. Tatnell was still not safe as McFadden had been pulling points back quickly
Ryan Farrell’s charged stopped once he got by Tatnell and the Diamond Bay Motorsports back racer had once again showed that he was one of the most underrated drivers in Australia

Madsen crossed the stripe first to claim his fifth WSS round win, Farrell a resounding second and Brooke Tatnell third.

After 12 rounds at Speedways across Australian Brooke Tatnell is the 2014/15 Enzed World Series Champion .After looking for some long as being able to take his first WSS Championship David Murcott was second and James McFadden third.

The final points for the top 5 WSS : 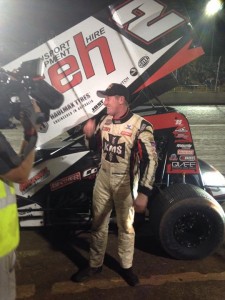