Outlaws on the move Florida to Texas. 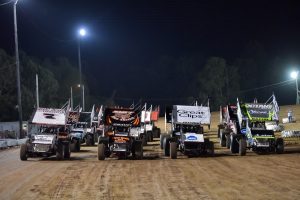 With the first three events of the 2017 calendar already in the books the World of Outlaw Sprintcar teams haul their way up from Florida to the bad lands of Texas for two shows .The first at the Lone Star Speedway  Kilgore and then onto the Gator Motorplex at Willis.

The defending Outlaw Champion Donny Schatz has two wins from the three starts and sits on top of the points from Chad Kemenah and Jason Johnson, Kerry Madsen and Brad Sweet.

Night one in Texas will be the Lone star Speedway a high banked 1/3 mile Clay oval and the following night at the Bullring at the Gator Motorplex. The Gator Motorplex is a ¼ Mile high banked with about the widest straight-a-ways the Outlaws encounter. The straight has been widened from 35 feet to 50 feet and the corners from 60 to 70 feet so expect plenty of aggressive passes.

Jason Johnson goes into the Gator show having won there at his last two starts. Most of the contracted Outlaws will be making their first appearance at the bullring.

The 2017 season promises to be one of the most competitive in years and although Schatz has started more strongly than previous years the changed Team line ups are sure to spark some intense competition .New cars and Teams for Kerry Madsen and Joey Saldana has had some mixed results.Kerry Madsen already has put the Go Muddy unit in victory lane while Saldana has had a scare or two down in Florida.

The top 5 in the points heading to Texas ;