The defending World Series Champion Steven Lines and his Halls Motorsports Team continued their charge to retain their title with their win in round 9 at Atwell Speedway Albany Western Australia .Coming on top of his round 8  his chances of retaining his title look a little stronger with three rounds remaining. 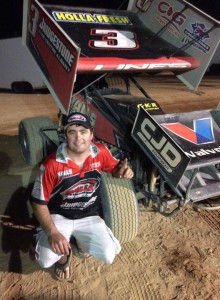 Steven Lines after his Albany win

The Albany meet saw the return to World Series of Ryan Farrell for the first time since serving his suspension over drug use that forced the West Aussie to have a break from the sport .It did not take Farrell long to reminded the WSSC boys of his special talent when he went fastest during the qualifying time trials.
At the back end of the Championship every point is vital and with the finals rounds set in the West strong challenges from locals will ensure the task is more than a little difficult for the contracted drivers and particularly the top three in the Title chase, Murcott, Tatnell and the King of the West Champion Kyle Hirst , they all want this Title.
The top 8 shootout would settle the starting position for the A main. The locally based Halls Motorsports Team with Lines at the wheel took the shootout from Farrell and Hirst who had raced his Monte Motorsports W17 from P7 to P3. 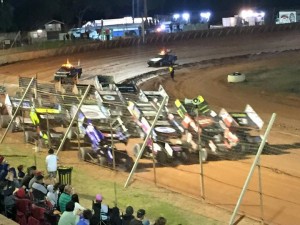 The salute to the crowd at Albany round 9 WSSC

Staging for the 30 Lap A Main and the race cars did their customary 4 wide salute to the crowd .The next lap the drivers moved into their starting position and headed to the green.
Lines, Farrell and Hirst headed the field and with 4 laps in the lapped traffic started to add excitement and drama to the race .Could Farrell take advantage and get past the defending Champion. Farrell tried to take advantage of the traffic but could not get close enough to throw down the challenge .Lines always had his measure. Kyle Hirst was also looking for his chance as he hot footed through the traffic after the two leaders.
Lines stayed in control and went flag to flag to post his second WSSC win for 2014/15 and improve his point’s position. Ryan Farrell’s second leaves no doubt that even with his limited race schedule he is one of the best around .Kyle Hirst followed up his Classic win at Warnambool with the final Albany podium.
David Murcott still holds the lead in the series after his 7th place finish and Brooke Tatnell’s 9th enough for KMS driver to hold onto his second place .Kyle Hirst is in third only 100 points behind Murcott. 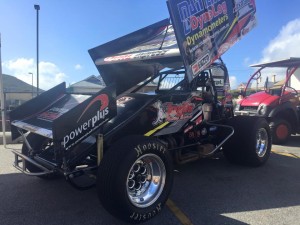 James McFadden after crossing in 4th place rolled during the slow down lap but was not injured. The team now head to Perth and the Motorplex for round 10 tonight and the top contenders and their points are.
Murcott 2372, Tatnell 2322, Hirst 2272. McFadden 2217, Lines 2086

DNF NQ 42 Brent Aprile
This World Series report is brought to you by  the February isssue of Flat Out the only magazine for all your Sprint and Midgetl racing from the US.Available in Australia on line visit our Flat Out page A7.95 delivered to your door by Australia .Secure payment via Palpay 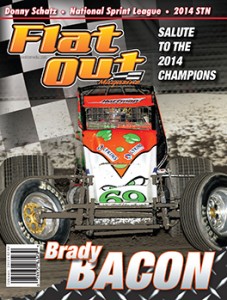