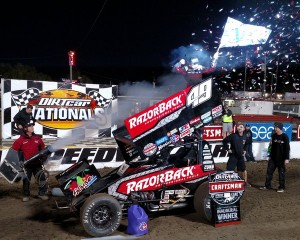 Barberville Florida : It was sweet indeed at the World of Outlaw Opener at Volusia Speedway Park for Brad Sweet making in a making last lap pass on teammate Daryn Pittman for the opening victory in the chase for the 2016 World of Outlaw Title.
The Kasey Kahne teammates shared the front row of the grid as the field got the new season on it way.
New team combinations had mixed fortunes during the 30 lap openers with Gravel in the Big Game car and Saldana in the Roths Motorsports entry had disappointing results.
This openers was another race win that got away from Pittman when teammate Brad Sweet after chasing for the first 20 laps make the winning pass on the final lap. 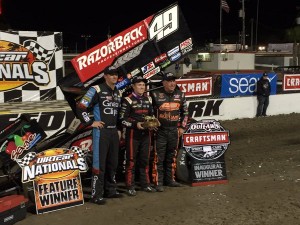 Possibly the biggest surprise was the DNF of defending Outlaw Champion Donny Schatz .Schatz had rare engine problem forcing the #15 car from the race on lap 20 .Schatz had driven from 17th to second and one can only think another Outlaw win was on the way, sadly for Schatz this would be his first DNF since September 2013 and the fist in 178 races

The opening Outlaw race was good for Bryan Clauson and  his commitment is starting to show with a cracking drive into 5th after starting from position 14. 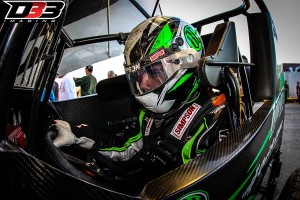 .The two so called retiring Outlaws Steve Kinser and Sammy Swindell had races with totally different endings.Kinser had major contact with Austin McCarl ending with both flipping over. Both were ok. Sammy Swindell on the other hand had worked his way past all the drama to garb the final spot on the podium behind Sweet and Pittman.
The next Craftsman World of Outlaws show will be February 26th at the Cotton Bowl Speedway.