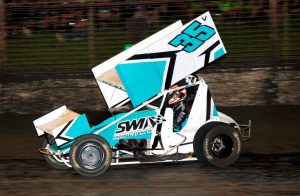 Easter means different things to different people but around Easter Time along with our Christian beliefs Aussie Sprintcar Fans are drawn to Speedways in South Eastern Australia for the running of the annual Easter trail .A three stage series held over successive nights at Avalon Speedway Victoria ,Borderline Speedway in South Australia and the final back across the border at Premier Speedway ,Warnambool  Victoria.Good Friday evening Avalon Speedway starts the Easter Trail and it was before a massive  crowd that Jamie Veal let his intension be known . The track was single file early but as the racing continued into the night the track widened and after not winning his heats Veal was able to use the widening track to full effect winning the Trail opener easily from 2018 Grand Annual Classic Winner Corey McCullagh and Mike Van Bremen.

Easter Saturday and it was off across the Border into South Australia for night two at Borderline Speedway. Our Contributing Photographer Steve Walters was track side and snapped some of the action for you, visit our Facebook Page for a look.

With confidence high and the SWI#35 all gassed up Veal went about his business early timing first in his group and strong heat finishes before clinching the A Main from Two times National Champion David Murcott and John Vogel. 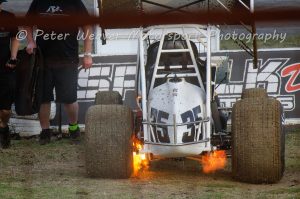 After such a strong performance at Borderline Veal’s intensions were clear and the big question in everyone’s mind was could the lad from Warnambool complete the treble and become the first Driver and Team to win all three nights of the Easter Trail. A big Cash bonus awaited Veal if he could seal the series with a historic win at his home track .

Back across the Border from South Australia they came to Warnambool in Victoria, anticipation in the team would have been high and the chatter track side would be about one thing, can Veal do it?The answer would come a little later in the night after setting fast time in qualifying and two seconds on the way the Final A Main Veal was in a good pace. One to go the big one and a $10,000 bonus waiting. 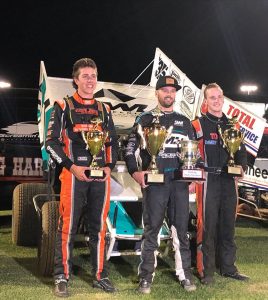 The three wins of the Easter Trail netted Veal a cool $10,000 bonus and at the same time he had won the Parr Motorsports Premier Track Premiership worth another cool $10,000 for the 2018/19 Season.The Geelong Harley Davidson Easter Trail was complete for 2019 and the Series celebrated the Historic Win by Jamie Veal and the SWI Team.

Photos on this page are protected by the owners Copy now Right if you wish to use or purchase any photos that appear on our Web Site please contact below.