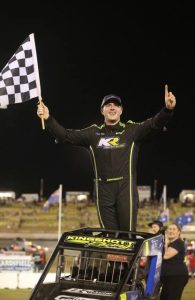 Last night at the fabulous Perth Motorplex Dyane Kingshott shot to the top of Australian Speedcar Racing when he towered above the field with a flag to flag win.

Kingshott has been the high marker in Western Australian Speedcar ranks for several years but with the Australian Titles within his reach several times it has always eluded him. Kingshott was on song right from the start of the night, winning all his three heat  races and the important pole shuffle .The classy West Aussie had the rights to the pole starting position ahead of the 40 lap Championship Final.

USAC Midget star Jason McDougal was alongside Kingshott as they faced the starters flag. Kingshott’s early domination would continue right from the drop of the flag. Kingshott was never headed throughout the 40 Laps but despite his brilliance, his hard-fought gaps on the field would be reduced by the four yellows throughout the 40 laps, despite these short interruptions the West Aussie continued to have eyes wide opened on the Title. Each restart Kingshott easily recovered his lost ground and a despite a hairy moment in traffic late in the race and Adams Clarke’s late race challenge the rights to Australia One were safely earmarked for the tail of the Bunbury Subaru/Cochrane’s Sheering Sheds/Esslinger. 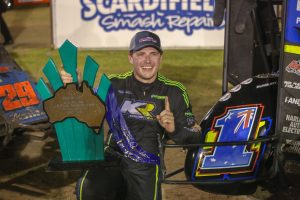 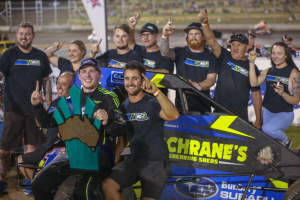