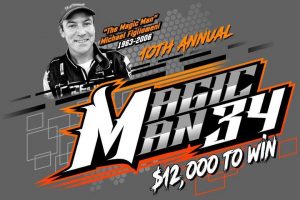 “Four American drivers will be taking on Australia’s best at the $34,000 Magic Man 34 event on November 5 at Perth Motorplex.

Two of them have won the event previously including four time victor Davey Ray and 2013 champ Alex Bright. Fellow Americans Zac Daum and Justin Grant will be hoping to add their names to the list of drivers to have won Australia’s richest Speedcar race.

But they will be facing a tough group of locals including in-form young gun Kaiden Manders, last year’s winner Neville Lance and two times WA State champion Dayne Kingshott, who has been gaining plenty of experience in the USA himself.

This year’s Magic Man 34 will be the final running of the event dedicated to Speedcar driver Michael Figliomeni, who tragically passed away of a heart attack in the pit paddock of Perth Motorplex.

Perth Motorplex speedway manager Gavin Migro said the family made the decision to make the 10th running of the event the final one.

“The Magic Man 34 event has been a great tribute to Michael’s memory and one of the favourite races for fans on the calendar,” he said. “The family really want to make sure the final event goes out on a high with one of the best fields and highest payouts Australian speedcar racing has ever seen.

“The family felt that after ten years the time was right to bring closure to the Magic Man 34 event and that a world class international field will pay homage to the great Michael Figliomeni in an appropriate manner.”

The Magic Man 34 begins from 6pm on Saturday, November 5.