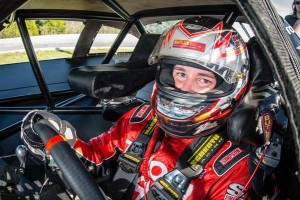 MOORESVILLE, N.C. (June. 10, 2015) – Kyle Busch Motorsports (KBM) announced today that 20-year-old Christopher Bell will make his NASCAR Camping World Truck Series debut June 19 driving the No. 51 Toyota Certified Used Vehicles Tundra in the American Ethanol 200 at Iowa Speedway in Newton.
The 20 year olds talent has been rewarded by many team owners over the past couple of year as the Oklahoma race wiz blazed his way across the dirt tracks in the US and Australia. Christopher Bell is a familiar and guaranteed race winner so the move into Truck racing with Kyle Busch Racing is a natural progression that is sure to bring success.
2015 Bell has tasted victory in POWRi Midget races, World of Outlaws Sprintcars and four victories on the pavement with the KBM 51 Toyota including the Rattler 250 at South Alabama. The versatility and ability to adjust immediately once his backside his race seat is a rare talent shared by only a very few. 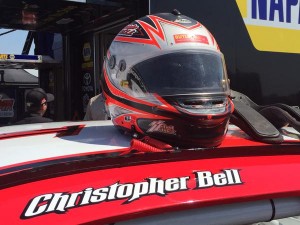 Behind the visor is a determined racer, clean but lighting fast.
“I’m really excited to have Toyota Certified Used Vehicles (TCUV) as a sponsor and I’m looking forward to making the most of the opportunity to race in the NASCAR Camping World Truck Series for KBM, TCUV, and Toyota,” Bell said. “Although the vehicles will drive somewhat different, being able to race in the K&N Series last month will help speed up my learning curve for the Truck Series race, and having Jerry (Baxter) come out to crew chief that race gave us a head start on our communication as well

.
Bell’s pavement schedule will cover 20 races along with his commitments to Keith Kunz Motorsports with both midget and Sprintcars.Dirt tracks or Pavement this young Oklahoma honker is destine for many major race victories .

You can follow all the Dirt Track speedway action including Sprintcars,Midget,Late Models and Dirt Modifieds Check out our Flat Out ,Dirt Late Model and Dirt Modified pages on our web site .Each magazine available for A$7.95 including postage to your door ORDER NOW!