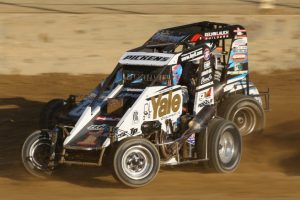 Nelson Speedway at the top end of New Zealand played host to the running of the New Zealand Midget Car Championship.The stage had been set on Friday night with Pickens leaving the Speedway the top point’s man. With possibly the best ever field for the National Title assembled .All the pressure was on Pickens as he chased a seventh Championship and the chance to equal the feats of that past great New Zealander Fred Tracey.

Pickens continued to gather points throughout Saturday night and ended the heats on top of the points. The race plan was on track after he won the Dash to gain that vital pole spot.In the early part of the race Pickens was devastatingly quick but his race lead was interrupted when Dayne Maxwell said hi to the wall and the yellow was displayed. The break in the race did little for Pickens and on the restart he made a mess of the start allowing Hayden Williams to grab the race lead.

For the first12 laps it appeared that Pickens dream of a seventh Title might be last. Williams made Pickens work hard, he remain determined to spoil Pickens night. At one point Pickens had fallen to third behind Spencer Bayston and with Mosen, Daum, Thomas and Bright all charging.

Pickens charged back to second and then took advantage of a Williams’s error to gain the race lead; Mosen had shaken off the Americans and took Williams for second. Fans were getting excited not only as it looked like a Pickens win was now well and truly on but the chance of an all Kiwi podium .Sadly for Williams Spencer found a hole in Williams defense to sneak past meters from the flag for third. 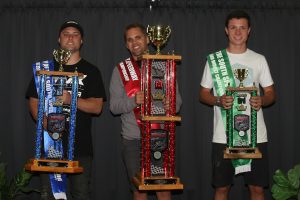