Michael Pickens back to Back Butterworth Memorial Classics. 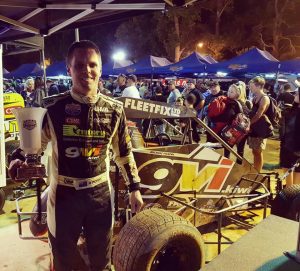 What can we say that has not already been said before about Michael Pickens? He just keeps giving to race fans in New Zealand, Australia and across the world.

Wins across the World under pins his greatness. A stack of New Zealand Titles and an Australian Speedcar Title under his helmet and now back to Back Barry Butterworth Memorial Classic.

As defending Champion Pickens had to start rear of the 21 car field .A field full of determination, the Butterworth Memorial is one they all want to have their name of the trophy and that included visiting  USAC and Powri Campaigner Zach Daum

In a drive that would have received applause from Butterworth himself Pickens drove to the front on lap 20 and was never headed.