Friday and Saturday nights will be awakened by the sounds of the POWRi Midgets racing on both side of the World .Friday night at Jacksonville Speedway is the first of a two night schedule finishing on Saturday at Macon Speedway. 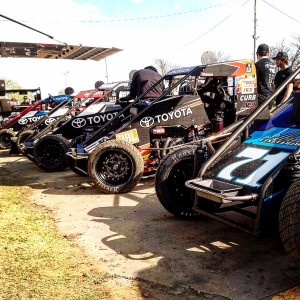 The Kunz team lined up at the Turnpike Challenge

The POWRi fields at Jacksonville and Macon will be headed by the powerful Keith Kunz Motorsports Team with 2015 Chili Bowl and USAC Champion Rico Abreu making a rare but welcomed returns to the midget. Supporting Abreu will be Thorson, Macedo, Bayston, Holly Shelton and Robinson.

A six car invasion by Midgets most powerful and successful Team will not automatically guarantee top spot on the podium.The last POWRI meet at the Turnpike Challenge at Port Royal Speedway saw locals get the better of Tanner Thorson on both nights of the Challenge.

Saturday night down under at Valvoline Raceway the final round of the POWRi Lucas Oils Speedcar Super Series sponsored by Diamond Air-Conditioning .The final has attracted a field of 33 midgets with the entries from all States plus New Zealand . 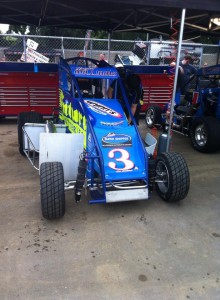 The current Western Springs Track Champion Hayden Williams will cross the ditch to team up with Moree based team of CJR in the Q82 Mopar .Williams hardened by the his many tough campaigns at Western Springs and backed by recent US experiences will be difficult to beat .The past Western Springs season has catapulted the BMW Technician to the head of the NZ Speedcar standings. Williams is expected to stay on and race the following week in the annual 50 lapper when Michael Pickens will be back at Valvoline .

Heading into the series final defending Champion Nathan Smee cannot be beaten for the series but to get the final feature win he will need to overcome his biggest rival former national Champion Adam Clarke who is return after a short rest where his Jack Berry Racing Polar ice rocket has been refreshed.Smee, Williams and Clarke will have no shortage of challengers once qualifying is finished.