The blitz continues for Kunz Its Abreu at Kokomo 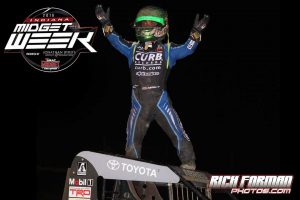 The final round of the USAC Indiana Midget Weeks was well and truly closed out by the Keith Kunz/Toyota Team when Rico Abreu in his DC Solar # 97K added a fifth win for Team owner Keith Kunz at Kokomo.Rico started the night without a Feature win during the Midget week but his pace during qualifying was an indication of what was to come .Posting fast time for the Prosource Qualifying time over Bell and Bacon and the stage was set for an exciting last night of racing in Indiana. 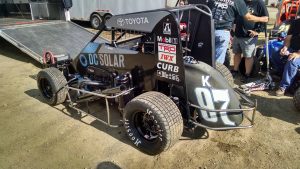 Chad Boat and Bryan Clauson shared the front row for the 30 lap Feature in the Final Indiana Midget Championship Week.Boat lead the Feature for 21 laps before the power of the Kunz team started to take affect with Abreu, Bell and Bayston all looking for a piece of the #84.If the powerful Kunz boys was not enough Clauson was lurking and intent on securing the Indiana Midget Week Title .Clauson entered the race with a 40 points advantage over Bayston.

For the next 9 laps Abreu made the pace up front while Bayston pushed Boat back to third and Brady Bacon got the better of Bell for fourth leaving Clauson to finish in sixth place but on top of the points for the week. It was Abreu’s Feature but Clauson left Kokomo as the 2016 Indiana Midget Week Champion

What can you say about the performance of the Keith Kunz/Toyota Team with wins by Larson, Bayston,Thorson ,Bell and finally Abreu. The Team sponsors will be overjoyed and just like the fans impressed with the management and ability to get all 8 cars  up and racy for each and every race during the week. 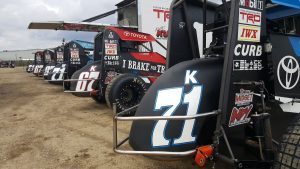 Bryan Clauson’s work rate through this week has also been impressive driving both the Midget and the no winged Sprints .Champion in both classes for Indiana Midget Week.

Rico Abreu at the post race interview ““Running the top the way we did tonight is tough because you have to keep the tires spinning and not let the motor get bogged down,” Abreu explained.  “Midget racing is all about momentum and I felt like, running the bottom, you could get to the middle really quick, but then it would kill your exit because you are so sideways.  So, I just tried to keep it straight up top and keep the wheels spinning, so it didn’t start bouncing.  It means a lot to win another one of these races because this midget deal is so competitive right now with Clauson and guys like Brady Bacon, Tyler Thomas, plus eight Keith Kunz cars now.  So, instead of just four or five competitive cars, there’s more like ten.  Track position and qualifying are even more important now.  It was a great week for us, but we would’ve liked to have had a better start to the week.  But, big congratulations to Bryan because I know how tough it is to win this whole deal.  I want to run it next year and get a third one.”

Spencer Bayston ““I was running the top, just not running it right,” Bayston admitted.  “When Rico went by me, he kind of showed me a little different line.  I’d run it deep into three, but turn off too early and start bouncing.  So, when he went by, it showed me I could run in deeper and come across a little smoother.  I think if I’d gotten up there before he got to me, we would’ve been alright.”

Chad Boat ““It’s a little disappointing to lead that much and run third, but it was still a great run for us,” Boat said.  “We had a solid week and I was excited to get back here to the Indiana bullrings and to come here to Kokomo, which is my favorite track.  We obviously wanted to cap off the week with a win, but we’ll take the third and try to keep the momentum up for Arkansas.” 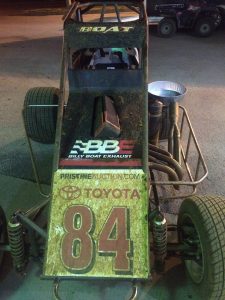 Clauson was not able to secure a win during the 5 night but his collection of points during the week ensure that the Team of  RKR-Dooling Racing/Cancer Treatment Centers of America – B & H Contractors/Spike/Stanton SR-11 took home the prize at the conclusion of the 5 nights of racing .

On receiving the Indiana Midget Week trophy Clauson had this to say ““We were strong all week long,” Clauson exclaimed.  “We knew tonight, seeing how rough and heavy the track was, that it wasn’t really our cup of tea, so we were just trying to make sure we did our job and finish this thing off.  We ran strong all week; we just came up a little short the first few nights to get a win, but a few years from now, the only thing people will remember is who won ‘Indiana Midget Week.’  I’m proud of these guys, so we’ll just keep plugging along and see if we can get into victory lane.” 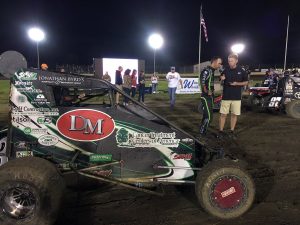 Australian’s entry Dyane Kingshott finished with 136 points in 21st position out of a field of 53.Making his first USAC appearance and at tracks that he had only ever heard about his performance in making all 5 Main events was a superb achievement and the team will have to regroup quickly for the POWRi Illinois Speed Week starting June 8 at Belle-Clair and running for 5 night  .