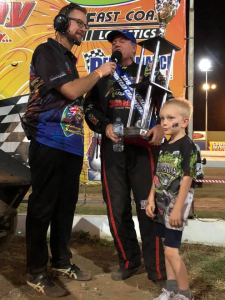 Starting the 40-lap final on the outside of Robbie Farr with defending Champion Kerry Madsen way back in 15th after more troubles during the heats.From the start it was Farr down low with Scheuerle looking for a way around the top but before the end of lap one McFadden had taken advantage of the squabble for the lead between Farr and Scheuerle to take the lead. Many of the McFadden fans in the massive crowd would have put the glasses down assuming their Champ had this done.

Scheuerle finally got by Farr on lap five but a spin by Peter Lack would send the Queenslander back behind Farr. The restart was interesting with McFadden faltering in turn four after the green bringing him into contact Farr who hit the Two times Aussie Champ. This hit would finish off Farr’s challenge forcing his retirement from the Championship chase and a restart, this would be the one and only restart.

McFadden took every advantage from the restart to build a comfortable race lead over Scheuerle Veal and Oldfield.By lap 10 Scheuerle’s hometown band of fans would have seen their expectations raising as the local pulled back the McFadden lead. Scheuerle would have wait a further 11 laps before he could make what was to be a Championship winning pass.after making the pass Scheuerle was never headed getting superior speed across all lanes of the Archerfield tack.

The crowd were off their seats, excitement was everywhere around the track as the local committed Queenslander headed for the flag and crossed the stripe to win his first Australian Sprintcar Championship. Don’t underestimate this effort, a win from behind with many more fancied drivers’ ways back in the field.

The 2019 Australian podium was Andrew Scheuerle,James McFadden and Jamie Veal