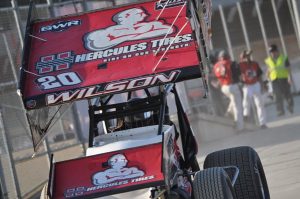 Greg Wilson with Hercules on his side stunned the Outlaws at the Dirt Track Charlotte with a come from behind last lap win. The Ohio based racer rarely races with the Outlaw event and his recent efforts have been disappointing.

The Dirt Track at Charlotte fans looked like installing Shane Stewart as early favorite when the Larson Marks entry posted quick time for the night .After the heats and dash had been decided the front row of the 30 lap Main was fronted by Daryn Pittman and Ohio’s Cole Duncan. Greg Wilson and Shane Stewart sat side by side on row two. 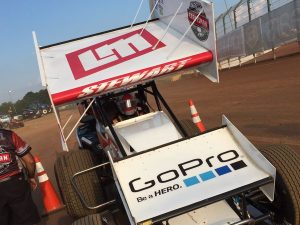 Cole Duncan surprised Pittman and led the charge for the first 4 laps before Stewart managed to squeeze ahead and lead into lap 5. By half race distance Wilson was back in 5th place with Pittman, Duncan, Saldana and Stewart ahead.

By the time the caution for Jason Sides was displayed with laps left in the book Saldana had fallen to 5th and Wilson had passed Pittman and was racing nicely in third place behind Duncan and Shane Stewart.

The race track appeared to be taking rubber and getting slick as the top three raced towards the finish. In a dramatic finish Greg Wilson must have summed the strength and wisdom of Hercules and with a stunning back straight move passed Duncan  first then with just the last corner to go move under Stewart as the Larson Marks driver could not hold his position and Stewart fell to second .Wilson had found the drive on the bottom of the track early and had his race car placed perfectly as he entered each corner and clearly managed the track condition better than those chasing and and the Ohio wheeler went on to record only his second Outlaw win .It was an amazing finish that brought the crowd to their feet cheering madly. 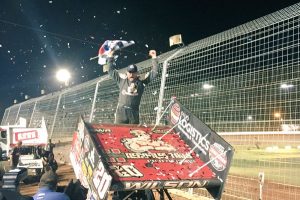 Wilson’s first Outlaw win was last September at Eldora in the four Crowns event. It is not always the best funded teams that succeed and this case it was the driver who recognized the track conditions early and managed to place his race car in the right position, exactly what the Hercules Tire/Ohio Logistics No. W20 did..Congratulations Greg Wilson on a superb race wins.

Driver interviews: Greg Wilson  “It’s a little surreal right at the moment…I’m just in shock,” An emotional Wilson said. “I am racing with the best sprint car drivers in the world, night-in and night-out. We missed that show in New Egypt and looked like maybe we shouldn’t even be out here, and then we turned it around tonight.

“That’s dedicated work by our team and all of the people that are a part of this. I am truly grateful. Once again, if you’re not a Wilson fan, thank you for spending your hard-earned money to be here tonight.”

Shane Stewart “”It was good to have Justin [Marks] and Kyle [Larson] in the house, and to have a good finish for them,” Stewart added.”There’s a lot of Eneos Oil people back at the trailer too, so just a good solid finish for everybody at Larson Marks Racing. I love all these fans – it’s always a joy to come here to Charlotte.”

Cole Duncan “we’ve been fast all year but just can’t seem to find victory lane yet, but they got to be coming. We are pretty consistent and we keep putting the time and effort in. We’ll go back to the drawing board; we don’t have to change much but just try to figure out how to keep the tires on there.”

The World of Outlaws Craftsman Sprint Car show will be back into the Hoosier State for a Memorial Day showdown at Lawrenceburg (Ind.) Speedway on Monday, May 30.