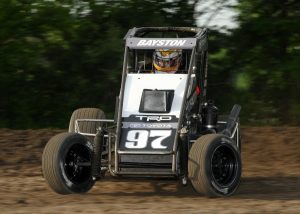 Gas City and 45 Midgets gather the pits for race two for the Indiana Midget Week. The crowd and most of the USAC teams would have been privately concerned that Larson would again remind them of his unbelievable versatility and ability to adjust from the pavement of the NASCAR World back to the hustle of  the real raw racing on dirt .

The Gas City track was lighting fast with the track record coming under attack during the warm ups with both Clauson and Abreu getting under the mark.Once qualifying was done and dusted Rico Abreu would emerge as the Prosourse fast qualifier over Ryan Robinson and Bryan Clauson. Heat winners were Ryan Greth, Tanner Thorson, Christopher Bell and Brady Bacon. 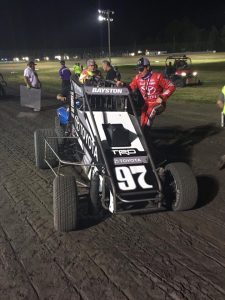 Spencer Bayston and Zach Daum had the front row for the 30 lap featurewith Clauson and Larson in row two.Bayston won the start and headed Daum into the first corner.The 2015 rookie of year started to settle nicely into the race lead and moved from the bottom into the middle of the track. The race was stopped on lap 9 when Chase Johnson’s night ended suddenly with a barrel roll in turn four .Johnson’s effort brought out the first caution. Thankfully Johnson was unhurt.

The restart was the only time Bayston was under real pressure and Daum got to the inside to lead the 17year old only to lose it by time the pair reached the stripe for lap 9.At this point Daum’s race started to fade under the pressure from Larson and Clauson.By the halfway point Clauson had pushed past Larson but Bayston was clear with one-and-half second .up his sleeve.

When other 17 year olds are planning their summer vacation Bayston was blitzing past back markers with the skill of a second professional and nothing that Clauson or Larson had made any difference .With  just 7 laps remaining Thorson’s car stopped and brought out a caution , providing  Clauson and Larson one last chance to overhaul the 2015 Rookie of the year .If Bayston was nervous on the restart, and who could blame him with a host of USAC winners  all over his tank he showed no signs  and took the restart with total authority leaving Clauson and Larson to argue over the runner up position. 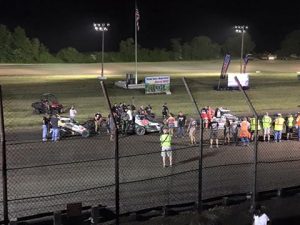 The battle for second between Clauson and Larson grabbed the attention but Larson’s efforts came to an end when he clipped a turn four tyre marker and slowed and would he would have to settle for third.Bayston’s drive was that of a master professional and the Gas City win was the first of many more USAC National wins to come.

Keith Kunz must surely be about the best judge of new talent around, his ability to pick replacements when his stars Larson, Bell and Abreu move on to the bigger NSCAR stage is nothing short of stunning.

With the sun setting above the Gas City Landscape the haulers head out with their cargo of midgets to Lincoln Park Speedway Putnamville night two of the Indiana Midget week comes to a close and Bryan Clauson with two second places finds his way into the lead for the Indiana Midget Week Championship with 152 over Larson 150 and Bell third with 140. 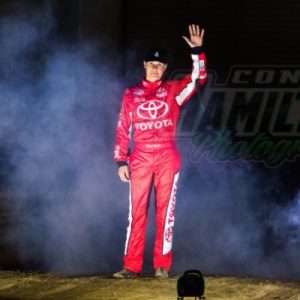 Driver interviews: Spencer Bayston “I’m speechless right now,” Bayston exclaimed.  “Big Al (Scroggins) had the car absolutely perfect.  I could hold it to the ground and it would dig the whole way around.  I was waiting for Bryan (Clauson) and Kyle (Larson) to show up, but these guys gave me a good enough race car that I could stay out front.  I was getting some signals under the red from my guys about where those two were running, so I just tried to focus on my line and tried to keep making good laps.  To race against these guys is special and to beat them is even more special because both of them are guys that I’ve looked up to my whole career.”

Bryan Clauson “Our car was alright tonight; we were just a little off,” Clauson admitted.  “We could hang; we just didn’t have enough to mount anything.  I pulled out everything I had to hold Kyle off.  Those three points could play a big factor at the end of the week, but it’s a great start to ‘Indiana Midget Week’ for us.”

Kyle Larson “It’s always fun racing Bryan (Clauson),” Larson said.  “I needed the caution, but I needed to restart in front of Bryan and, after that, I didn’t really have a shot at Spencer (Bayston).  He wasn’t on the bottom in (turns) three and four and I could get through there pretty well.  Bryan was running on the bottom in (turns) three and four too and it was enough to slow me down a little, but I had a lot of fun.  It was a pretty solid weekend of racing for me, so a big thanks to Keith (Kunz) and Pete (Willoughby).”