Davenport digs out late pass on Owens at Nationals 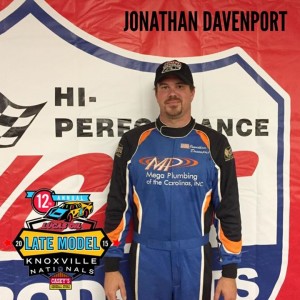 KNOXVILLE, IA -September 24, 2015 Jonathan Davenport digs out late pass on Jimmy Owens to take the win on night one of the Knoxville Nationals for the Late Model.
Sharing the front row with Ricky Weiss Davenport bounced out at the green and lead the race for the first 19 laps .Owens chase hard from his 6th starting position and by the time the pair had reached lapped traffic Owens had managed to find his way into the race lead .Owen could only hold the race lead for 3 laps before Davenport was back into the lead, a lead he would not surrender.

As the Late Models crossed the stripe it was Davenport, Owens and Don O’Neil Earl Pearson Jr and Chris Brown would round out the top five positions.

Driver’s interviews:
Jonathan Davenport “Lapped traffic is so tough here sometimes,” said Davenport, who recorded his 20th overall feature win of the season. I can’t thank Lee Roy Rumley enough for this strong engine. On this big of a track, we need all the horsepower we can get. The track was super-fast tonight. We could run anywhere on it.”

After night one of the Nationals the top 10 in points is:

This report has been brought to the Wed with the assistance of DIRT LATE MODEL MAGAZINE .

Keep up to speed with all the Dirt Late Model action from the US .To grab your copy visit the Dirt late Model page yours for A$7.95 Postage paid .