Neville Lance the 2013 Australian Speedcar Champion fought through cautions, crashes and final pressure from US POWRi star Austin Brown to take the ninth Magic Man 34 Title at the Perth Motorplex.
Lance a veteran of Western Australian Speedcars reminded fans that there is still life left in the old locksmith .The race promised so much after qualifying, heats and the pole shuffle. The build up to the 34 lap Feature saw some inspired racing topped off by the pole shuffle win by Darren Hagen over Queensland Troy Ware. 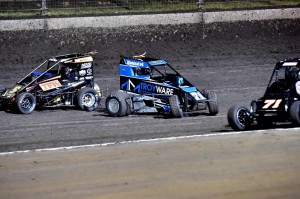 Adrenalin, enthusiasm at the start of any Championship race is part of the excitement and can generally lead to pile ups and damage to cars and driver‘s title aspirations .Such was the case for Ware and Hagen as they raced into the 3rd corner , lap one when Ware, the leading points scorer spun causing the early pile up and caution .The restart was called back and a third start finally had the field racing for Magic Man glory .Lee Redmond lead the restart with Hagen out and Ware forced back of field.
Redmond continued to lead with Tyler Thomas, Austin Brown and Davey Ray on the charge .Lap 7 and Thomas’s pressure finally opened the gap for the race lead.
For the next two laps Thomas exercise his authority over the field before suffering tire problems that had the American into the wall in turn one , nine laps in and once again Thomas is benched and an Aussie win goes begging , again for the likable young American.
Moving slowly forward from his 13th starting position Neville Lance was now challenging lee Redmond for the race lead and by lap 11 had the #14 racecar in the lead.
Behind Lance and Redmond the Americans were looking dangerous; they were coming .Davey Ray ahead of Brown while Kingshott and Smee were involved in their titanic battle.
Lap 18 was as far as Davey Ray’s race lasted forcing the 4 times winner infield and allowing Brown to start to chase down Redmond for second and to close down the lead Lance had built .The interest of the crowd was clear, could Lance withstand this late storming finish by Brown.
The charge to the finish was on, the crowd very clearly behind Lance .Last corner, last charge by Brown but the old master was not having any of it and closed out the American to cross the stripe as the ninth winner of the Magic Man 34 event. Lance a worthy Champion who in the past had race against the Magic Man but this was the first time that the Locksmith had made a Magic man podium .Redmond followed a close third with Kingshott holding off Smee for fifth . 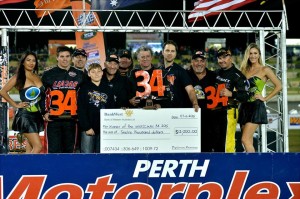