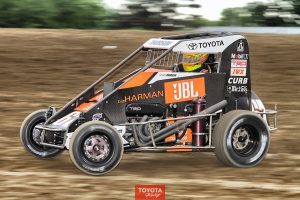 Lincoln Park Speedway night three of the Indiana Midget Week was another triumph for the Keith Kunz Motorsports /Toyota Racing but this time it was Tanner Thorson turn in victory lane.The last time Thorson was at Lincoln Park Speedway he left the track in a ambulance and ruined his chance at a maiden USAC National Title .To get the win Thorson had to overcome firstly his younger teammate 15year old Ryan Robinson ,Bryan Clauson and an aggressive Rico Abreu.

Missing from the KKM team for LPS was Larson and Bell but the strength of this team is its depths as both Thorson and Robinson proved tonight.Night three started with Brady Bacon getting fast time during the Resource qualifying followed by last start winner Spencer Bayston and Tanner Thorson.

Robinson started the 30lap feature with Clauson on his outside and just like Bayston did the previous night showed experience way beyond his years to lead Clauson from the green.Robinson held the race lead for the first 14 laps before Thorson was able to penetrate his defense and get into the lead. As the race entered the 18th lap Abreu’s presence was starting to be felt as the 2015 USAC Champion started to cut through the field, he was on a mission to get to the race lead, sitting in third Abreu progress was disrupted when Jmi Quinn spun. On the restart Abreu disposed of Robinson with a familiar slide job and now with Thorson firmly in his sight aimed for the race lead.

The race was nearing the end when Thorson had trouble on the cushion and suddenly Abreu looked a real chance and as he started to work past Thorson Darland and Holley Shelton tangled and the yellow was displayed .Abreu had lost a certain race lead and had to revert to second for the restart.

Abreu attacked Thorson with every move he had and the pressure worked to his own disadvantage when he slid high on the cushion and the every present and a patient Clauson took full advantage to take second. Abreu was not finished, pushing the limit of both car and track he jumped the cushion a number of times effectively killing any chance of the race win.

Thorson had one final barrier to overcome, a charging Bryan Clauson made one last desperate slide for the win but track position and the momentum was all with Thorson and win number three in the Indiana Midget Week went again to a Keith Kunz/Toyota driver Tanner Thorson.The podium on night three at Lincoln Park Speedway was Thorson, Clauson and Tyler Thomas. 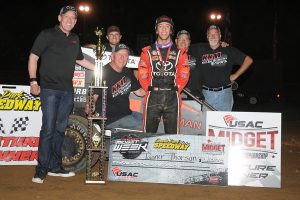 Driver quotes .Tanner Thorson“I left here last year in an ambulance, so to come back to this track and win is pretty awesome,” Thorson said.  “These guys work their butts off starting at 2:30 in the morning when we get back to the shop and it feels great to reward them with another win.  Rico had me nervous just because you know a big move is coming.  I knew the laps were winding down, but I knew that I just needed to keep hitting my marks.  The top was so treacherous that you had to nail it perfectly every lap.  I kept getting tight on the cushion and just tried to keep my composure towards the end because the last ten laps were really tricky with the track the way it was and knowing I had fast guys behind me.”

Bryan Clauson “We just needed more time,” Clauson said.  “I was a little snug early and each yellow just wasn’t what we needed.  We got rolling towards the end and Tanner was getting tight on the curb, but we were good enough off of it to make some decent speed; we just ran out of laps.  I saw the white and made my move in turns one and two because it seemed like it was easier to counter a slide job at the other end.  I felt like if I slid him in (turns) three and four, it’d be too easy to cross me over, so I took a shot in (turns) one and two and just came up a little short.”

Tyler Thomas “I moved to the bottom in the early laps of the race and it stuck, so I knew I needed to be down there if I wanted to pick some off,” Thomas explained.  “The top was so fast early on and the only way to pass was to slide somebody, but you had to have so much momentum to pull it off that it was just really difficult to make happen.  Fortunately, our car was really working well on the bottom and I could slide myself in turns three and four and catch the cushion on exit.  We qualified better tonight too, so if we can keep that up these next three nights, I think we’ll be in good shape.” 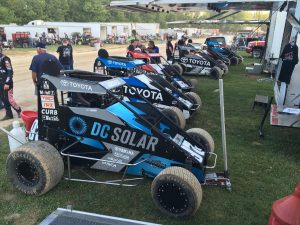 All six members of the Kunz Motorsports/Toyota Racing made the feature and all finished .The result 3 wins, three different drivers what an amazing display of team management, engineering and commitment to Midget racing.