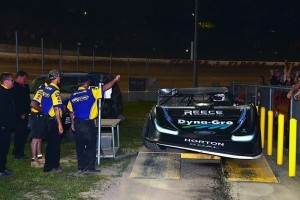 Bloomquist crossed the stripe ahead of Davenport at Eldora Speedway in the Dirt Late Model Dream 100 lap, but at weigh in he was 25 pounds under weight and forfeits the win to Davenport together with the hundred grand, ouch that hurt.
Bloomquist had to withstand a late race charge from Davenport who ran the topside aggressively over the closing laps.
Bloomquist no stranger to controversy over his career .The question of being overweight at the scales is nothing new in Speedway , many teams has suffered the same penalty and the questions continue .
Shannon Babb in 2005 forfeited his World 100 win when he weight in 10 lbs under weight.
Many race fans over years have called Bloomquist a cheater as many times during his successfully career he has sent confusing messages with his on track antics such as spinning in the mud directly after winning races and before going to scale.
I am not sure just how much mud this action would pick up but its claimed amongst and some competitors that this is to ensure he makes the weight .Opinions is divided among the many fans. 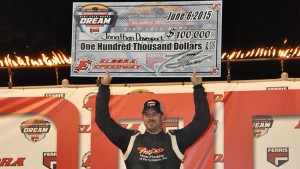 Bloomquists main problem as I see it is that he is so successful and it is a strange attitude shared by many race fans to criticize the guy because his special talents puts him at the very top of his race category.
Donny Schatz suffers the same from fans who for some reason can’t accept the special talents these guys have .Bloomquist’s record speaks for itself as does Donny Schatz’s
Being under weight is difficult to understand particularly has each race car goes through race inspection before getting cleared to race .Miscalculation of the fuel burn may well be the problem or as some claim a piece of the car fell off during the race, this cause could be easily solved by finding and matching the part to the car .
Away from the end race controversy the race was cracker and it looked like it would run flag to flag but debris in turn two and four brought out the first caution on lap 89. A further caution was out on lap 91 involving Matt Westfall and Gregg Satterlee
Bloomquist was first across the stripe with Davenport settling for second ahead of Earl Pearson Jr and Dennis Erb Jr , Don O’Neil followed after starting on pole in the Dream XX1
Joy turns to despair for Bloomquist when he is called light , crowd erupt as Jonathan Davenport is declared race winner and taked the cheque for $100K 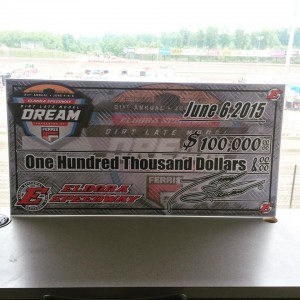 Yours for A$7.95 order stock is limited these are direct from the publisher in the US