Kerry Madsen from wreck to winner at WSS Borderline Speedway 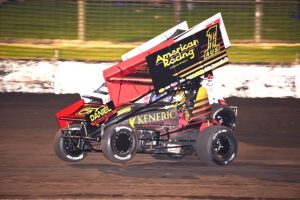 What a recovery by the Keneric/American Racing Custom Wheels Team and Kerry Madsen from a wreck pinned in the Murray Bridge Speedway’s  Fence to a dominate winner last night at Borderline Speedway.

Never far from the action or controversy on the way to the win Madsen and Mollenoyux had a coming together that resulted in damage to Mollenoyux’s front axle .Unable to control the car Mollenoyux ended up getting into Jamie Veal.

Veal managed to restart but the V52 was done for the night .Mollenoxyu let Madsen know his feeling but Madsen saw it differently, in fact very differently . I am amazed our the drivers attitude changes from accident to accident the night before Madsen was livid with Van Ginneken’s effort that saw the A1 hang in the fence while Van Ginneken saw it as a racing incident only.

Madsen was always in control and had the measure of both McFadden and Macedo right down to the finish .McFadden is certainly picking up the early points and on current form must be an early favorite to retain the Title

Jason Johnson and fellow American Dominic Sceizi ended each other’s night .Ryan Jones was quickest in the time trials from Veal and Madsen. 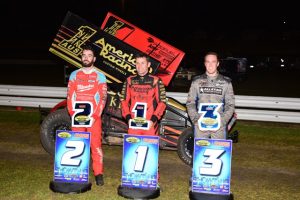 The Teams get a short breach before heading across to Victoria for round 4 at Avalon Raceway in Lara .The Transporter are loaded and  Avalon fans here they come !