. I reproduce the story from the January 1966 edition of Australian & Overseas Speedway news as it is as current today as it was way back then.
The experience of both Bill Goode and Blair Shepherd during their racing tour echo’s those of our recent tourists Nathan Smee, Adam Clarke and others. The message is clear under no circumstance should you ever under estimate the Kiwis. 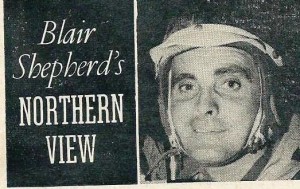 It’s great to be back on solid earth after two weeks on the Shaky Iles.I, for one am still getting over the shock received on arriving there.From the reports we had received both Bill Goode and myself went there not expecting such tough competion, but from the moment racing started it was staggering .

Top driver in New Zealand without a doubt is Barry Butterworth , who drives the immaculatedly preparedOffenhauser owned by Fussell and Cartwright , Aucklands leading car dealer .

A very strong field of repco Holdens and V8-60’s provide hard and fast competion in all races .Unlike Australia New Zealand put their top cars and drivers together in all the races, so that the four heats have the same fields racing as the feature over 6 laps .

Match races have anything up to 10 cars in them so you can see it’s no pleasure pinic, but really top racing .I must admit I went there a little unprepared for the onslaught and was caught napping .

Merv Neil another top driver there, came out the last week  of our tour in a twin cylinder car and set a new 6 lap record.Merv received burns to his arms the first week after his V8-60 blew a radiator hose .

I was disappointed that I could’t make Sydney last week m but my car needed alterations and was unable to be finished in on time .

Bill Goode was most disappointed on his showing  – all through the wrong gear ratio.

That’s it for the momentfolks,

regards to all, Blair Shepherd ” 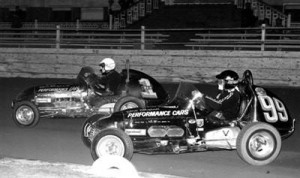 The picture of Blair Shepherd and Bob Morgan is from http://www.oldtimespeedway.com/