Smee cracks it up a notch in Brisbane 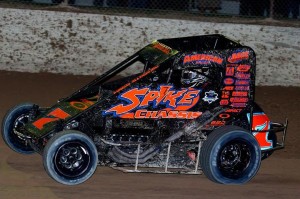 Nathan Smee’s recent form continued last night with his second successive round win for 2015 in the Diamond Air Speedcar Super Series at Brisbane’s Archerfield Speedway
Wining form is good form and with an ounce of luck tossed in for good measure Smee found the top step of the podium last night. Round 2 Presented by American Tire and Racing Services had 26 drivers start by running qualifying with fast time going to Lee Redmond over Adam Clarke, Matt Smith, Michael Stewart and Dyane Kingshott 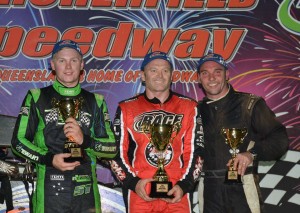 Heat race wins went to Adam Clarke twice and one each to Mark Brown, Braydan Willington, Paul Murphy and Michael Stewart
Young Wilmington continues to impress and his effort in heat 3 of holding out Chaffey, Stewart and Smith over the 10 lap journey was one of the highlights. Later in the feature Willimgton appeared to get into the rear of Michael Harders with the Queenslander ending into the wall and a nasty looking roll over. Racing incident, poor judgment strangely the race stewards took no action and young Willimgton escaped being sanctioned. Thankfully Harders was not injured.

Mark Brown was all class in the dash after heading Redmond at the start and earned pole for the 30 lap Feature. The early part of the race was all about the Brown Dog of old as the Peter Ghent Spike/Hawk raced comfortably in the lead until the first stoppage on lap 14 .Brown headed infield with a problem and his impressive charge was over .There was much confusion at the time with Remond stopping mid-track and fellow sand groper Kingshott spinning his Q3.Both drivers were sent rear of the field for the restart .Redmond complained that he only stopped when he heard instructions over the one way driver communications of Red being displayed .

On the restart Nathan Smee found himself in the race lead courtesy of the Redmond .Kingshott incidents. Once in the lead it was put the glasses down as Smee put the second round win into his bag.