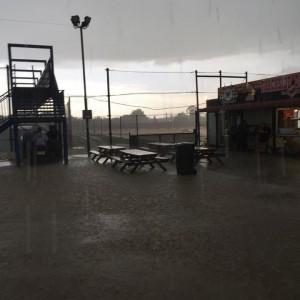 The latest round of the Carling Pro Series fell victim to the unpredictable actions of Mother Nature. Racecar engine misfiring, handling all at sea and tire section wrong all these thing race teams and their engineers can fix . The weather has a mind of its own

,Sydney’s weather during the past week has been crazy with violent summer storms tearing up the place before returning to some form of normality if only for a brief period. Round 7 of the Carling pro Series had the perfect build up, bringing together one of the strongest Speedcar field race fans and promoter could have hoped for.

Dayne Kingshott currently the series leader and defending Champion would face off against current Australian number one and POWRi Super Series leader Adam Clarke.
The entry list topped 30 Midgets and the race promised to give the winner bragging rights as the best in Australia. 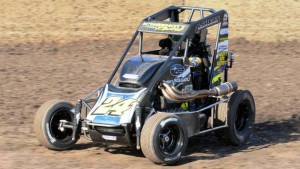 Return to the track of many past great victories was Mark Brown driving for the enthusiastic Western Australia 2 car team of Bennett Motorsports .The Brown Dog as he has affection become known would have welcome the chance to race side by side with Clarke and former POWRi and Australian Champion Nathan Smee. Brown a fan favorite at the track would have received a rousing welcome back from the fans.

After Saturday’s night rain out the Carling Pro Series teams will load their race cars and pack their kit bags and look forward the round 9 the Grand final at Warrnambool.The standing as they go to the final round for 2014 has the defending Champ Kingshott in a command position holding a 467 points lead over young Todd Wadell and a further 167 points back to former Australian Champion Neville Lance.
Many of the Pro Series teams have travelled from across the West of the Country and it is hoped that some might stay over and compete at the round 4 POWRi show this coming Saturday night at the picturesque Nowra Speedway just a 2 hour drive south of Sydney .